Asim was moved to ZSL London Zoo as part of the European-wide conservation breeding programme, in the hoped that the two tigers would be able to breed in the future. 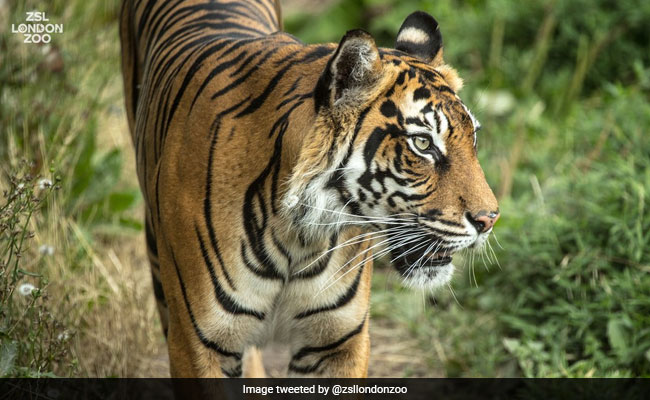 It was supposed to be a "positive" first date, planned for several days, between a rare Sumatran tiger and a potential mate at the London Zoo. The first meet had a "heartbreaking" end.

Melati, described as the "rarest and smallest subspecies of tigers", was introduced to Asim, a potential new mate. The meeting that began cautiously, quickly turned into an aggressive interaction.

Loud noises, flares and alarms that the zoo staff used to distract the pair did not help control the situation. Moments later, Asim overpowered the long-term resident - Melati, mauling her to death.

Following the incident, the zoo issued a statement saying, "Everyone at ZSL London Zoo is devastated by the loss of Melati, and we are heartbroken by this turn of events."

Asim was moved to ZSL London Zoo as part of the European-wide conservation breeding programme, in the hope that the two tigers would be able to breed in the future.

The zoo had brought the 7-year-old tiger 10 days ago, and kept the two in adjoining enclosures, where they could react to one another by smell. The reactions of the two were carefully monitored and on observing positive signs, experts felt it was the right time to introduce the two, according to the statement by ZSL London Zoo.

On Friday morning, the gates of the adjoining enclosures were left open for the two to meet. While the meeting began as predicted by the zoo staff, it escalated with Asim attacking Melati.

"Zookeepers were eventually able to secure Asim in a separate paddock so that they could safely get to Melati where our vets confirmed that she had sadly died," the statement read.

Everyone at ZSL London Zoo is devastated by the loss of Melati, and they are heartbroken by this turn of events, they said adding that as with all big cats, introductions, however carefully planned, are always considered to be high risk.

Following the incident, the tiger territory was shut for the rest of the day. The zoo posted a tweet about the incident adding that the team's focus is now on caring for Asim.

Sumatran tigers are the smallest surviving tiger subspecies and are distinguished by heavy black stripes on their orange coats, according to wildlife conservation non-profit WWF. The last of Indonesia's tigers - less than 400 today - are holding on for survival in the remaining patches of forests on the island of Sumatra. In Indonesia, anyone caught hunting tigers could face jail time and steep fines.