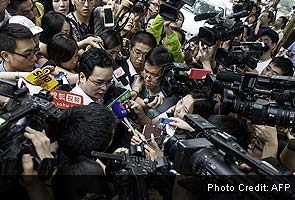 Legal advisor for the family of Li Tianyi - the son of a Chinese general charged with rape, according to state media.

Beijing: A gang rape trial that opened in Beijing on Wednesday accompanied by a blaze of local media attention has become China's latest legal spectacle to cast glaring attention on the lifestyles, and alleged misdeeds, of the political elite.

One of the five defendants is Li Tianyi, a 17-year-old whose privileged background and past misdeeds have made him the focus of a media and Internet uproar that has lasted months about what many see as the sordid ways of offspring of the political elite. Li is the son of celebrity singers for the People's Liberation Army and ran into legal trouble before the rape charges.

Like the recent trial of Bo Xilai, the fallen former politician, the case has become an intensely watched and debated parable about the privileges and limited accountability of the Communist Party's highborn. And accusations against the woman who says she was raped have stirred discussion about how the Chinese media and courts deal with the victims of sexual assault and minors accused of crimes.

"The factor behind why the media and everyone is so interested in this case is that it's about the so-called ugly officials and ugly rich," said Lu Pin, who helps run the Media Monitor for Women Network, an advocacy group in Beijing.

"Everyone wants to see them exposed in disgrace, because in the majority of cases nothing is ever revealed," Lu said in a telephone interview. "But in fact, opinion can also easily be turned so that this becomes a trial of the victim."

Chinese news websites have devoted special sub-sites to the case, and they showed pictures of journalists jammed behind police cordons outside the courthouse Wednesday, although the trial is closed to the public. Most of the defendants, including Li, told the court that they were innocent of the rape charges, the official news service, Xinhua, reported. The China News Service said the trial is likely to last two days; Chinese courts usually give verdicts about two weeks after a trial.

But for Li's status, the case probably would never have ignited the uproar. His father, Li Shuangjiang, is a highly ranked People's Liberation Army singer - sometimes, mistakenly, called a general in Chinese news reports - famed for his rousing odes to the party, patriotism and military virtues. The younger Li's mother, Meng Ge, is also a well-known military singer.

The cherub-faced Li was also dabbling with a musical career, but he won unwelcome notoriety in 2011, when a BMW he was driving hit another car. He and another teenager stepped out and beat and threatened the couple in the other car. Police later sent him to a labor camp for juvenile offenders, and since then his struggles have been chronicled in the Chinese media much as American entertainment news outlets track the wayward children of Hollywood stars.

"This case caters to the Chinese people's hatred of officials, the wealthy, and celebrities," Chen Youxi, a prominent Chinese lawyer, said in an interview with Phoenix television, a broadcaster based in Hong Kong. "Any incident that involves a famous person, a wealthy person or a princeling, public opinion will be naturally inclined to hate them, to attack them."

The prosecutors allege that the five defendants - four minors and a 23-year-old man - in February took a young woman they met in a bar to a hotel room in Beijing, beat her, forced her to strip and sexually assaulted her, according to a report on the website of the People's Daily newspaper.

China's courts are run by the Communist Party, but rival sides in the case have sought to recruit public opinion to shore up their cases. Li's mother, Meng, accused the manager of the bar where her son met the woman of running a prostitution ring and trying to blackmail her family. A law professor in Beijing suggested the victim was a prostitute, asserting she endured less harm than a "chaste" woman. News reports have said the victim worked as an office secretary.

Promoted
Listen to the latest songs, only on JioSaavn.com
The professor later withdrew the comments and apologized. Lu, the women's rights advocate, said the notion that a sex worker deserved less protection showed the pressures that women encounter when they make sex assault charges.

"Behind this is the fact that views about sex in China are particularly unfair to women," Lu said. "If you're a victim and you want to use public opinion to defend your rights, you pay the price through having your moral reputation being torn apart."
© 2013, The New York Times News Service
Comments
rapeChina