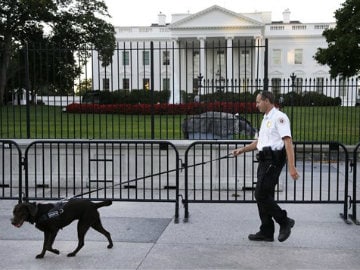 A member of the Secret Service Uniformed Division with a K-9. (Associated Press)

Rep. Elijah E Cummings, D-Md., was at the grocery store the other day when he ran into an elderly black woman who expressed growing concern about President Barack Obama's safety. Why, she asked, wasn't he being better protected by his Secret Service agents?

The furor that led to this week's resignation of the director of the Secret Service resonated deeply among blacks, outraged that those supposed to be guarding the first black president were somehow falling down on the job - and suspicious even without evidence that it may be deliberate.

"It is something that is widespread in black circles," said Rep.

Emanuel Cleaver II, D-Mo., who like Cummings is an African-American who has been approached repeatedly by voters expressing such a concern. "I've been hearing this for some time: 'Well, the Secret Service, they're trying to expose the president.' You hear a lot of that from African-Americans in particular."

Both Cummings and Cleaver said that they did not believe the Secret Service lapses reported recently had anything to do with Obama's race and that they had tried to dispel the notion among their constituents. But the profound doubts they have encountered emphasize the nation's persistent racial divide and reflect an abiding fear for Obama's security that has unnerved blacks still mindful of the assassinations of Malcolm X and the Rev. Martin Luther King Jr.

It is a longstanding fear. Colin L. Powell's wife urged him not to run for president in 1996 out of fear that he might be targeted. And when Obama took office in January 2009, the Secret Service recorded an alarming surge in threats against him. The threat level since then has actually fallen back to a rate more typical of previous presidents, officials said, but potential racial animosity persists in risk calculations by the Secret Service as it seeks to protect Obama.

The Secret Service does not discuss the nature of threats against Obama in much detail, but said the agency was fervently devoted to his security.

Obama has consistently made a point of expressing faith in the Secret Service teams that surround him each day.

"The president has no shortage of appreciation for the men and women who serve in the Secret Service, their bravery, their sacrifice, their determination, and the hard work and the courage they put on the line every day," Eric Schultz, a White House spokesman, told reporters Thursday.

But concern over Obama's security has been a quiet but consistent theme from the beginning of his rise in politics. Michelle Obama expressed worry even before he was elected to the Senate in 2004.

She later said she dreaded the day he would receive Secret Service protection because it would indicate that threats were being made.

And in fact, the agency assigned agents to guard him starting in May 2007, the earliest a presidential candidate has ever been provided protection.

It became such a refrain during that campaign that Obama found himself constantly reassuring supporters even as some of his aides fretted that his possible vulnerability would discourage some blacks from voting for him. "I've got the best protection in the world," Obama reassured supporters who brought up the issue. "So stop worrying."

The Secret Service did detect a spate of threats around the time Obama won the presidency and took office. But without providing numbers, the agency flatly denied reports that he had received three or four times as many as other presidents and added that they eventually subsided.

"After his first election, there was a spike in his numbers," Donovan said. "They've leveled out and they've been consistent and similar to his predecessors."

For many blacks, the recent series of missteps by the agency charged with his protection has echoed powerfully. "One of the greatest fears of a first black president was harm being done to him," Roland Martin, the talk show host, said on his radio program this week. The ability of a fence-jumper to make it all the way into the White House brought that home. "I can understand one or two, but for five layers to fail in the White House of all places?"

Charles D. Ellison wrote on The Root, a black-oriented online news site, that the episodes raised questions. "There could be only two reasons that Secret Service protection for President Barack Obama is slipping these days," he wrote. "Either agents missed the memo that he's the first black president or they really are just that overwhelmed."

Such sentiments are not uncommon. Joshua DuBois, a former White House aide to Obama, said the president's security feels personal for many blacks. "There's a broad extended family around the country of moms and aunts and uncles who feel a real sense of kinship with this first family, and they want to make sure they're protected and whole," he said. "So you see a lot of concern right now."

Some supporters of the president have long asserted that he has been treated with less respect by political opponents and the media, attributing that to his race. That has fueled suspicion that perhaps the Secret Service has not been as committed to him either.

Donald W. Tucker, one of the first black members of the Secret Service, who retired from the agency in 1990 and wrote a book about his experiences, said that he had no reason to believe the agency had not protected Obama vigorously but that he heard the concern regularly.

"I would say over 75 percent of the African-American community are suspicious and think that could be a situation, based on all the other things they think has happened to President Obama because he's an African-American, politically," he said. "They're adding that to the pot."

Rep. Steven Horsford, D-Nev., who is black, was among those who grilled Julia Pierson during a hearing before she resigned as Secret Service director this week. "I was at my church on Sunday and people were asking about it; they were concerned about it," he said in an interview afterward. "They are shocked and outraged by the lack of competence."

Cleaver said that even though "I'm as paranoid as anyone else," he rejected the suspicion and added that its prevalence troubled him. "There's nothing further from the truth, and it's a little dangerous for us to allow that thinking to grow and spread," he said. "To the degree we can dismantle it, we should. I'm going to dispel it as much as I can."