Quran Fragments, Said to Date From Time of Prophet Muhammad, Are Found in Britain 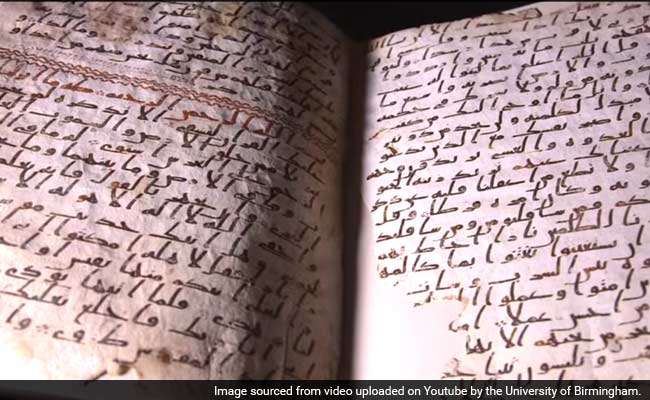 LONDON: Fragments of what researchers say are part of one of the world's oldest manuscripts of the Quran have been found at the University of Birmingham, the school said Wednesday.

The global significance of the ancient fragments, which sat in the university's library for about a century, became apparent after a Ph.D. student noticed their particular calligraphy. The university sent a small piece of the manuscript, written on sheep or goat skin, to Oxford University for radiocarbon dating.

David Thomas, a professor of Christianity and Islam at the University of Birmingham, said that when the results had come back, he and other researchers had been stunned to discover that the manuscript was probably at least 1,370 years old, which would place its writing within a few years of the founding of Islam. He said the author of the text may well have known the Prophet Muhammad.

"We were bowled over, startled indeed," Thomas said in an interview. The period when the manuscript was produced, he added, "could well take us back to within a few years of the actual founding of Islam."

Thomas said that, according to Muslim tradition, Muhammad received the revelations that form the Quran, the scripture of Islam, between 610 and 632, the year of his death. Tests by the Oxford Radiocarbon Accelerator Unit provided a range of dates and showed, with a probability of more than 94 percent, that the parchment dated from 568 to 645.

During the time of Muhammad, Thomas said, the divine message was not compiled into the book form in which it appears today. Rather, the revelations were preserved in the "memories of men," and parts of it were written on parchment, stone, palm leaves and the shoulder blades of camels.

Thomas said the discovery could help resolve a longstanding debate between Muslims who believe that the Quran was completed by the time Muhammad died and some scholars who contend that the Quran was changed or expanded in the century after his death.

He said the text of the two folio pages discovered in Birmingham corresponded closely to today's Quran, supporting the more traditionalist view of the holy book's inception.

The manuscript is in Hijazi script, an early form of written Arabic, and researchers said the fragments could be among the earliest textual evidence of the Islamic holy book known to survive. Susan Worrall, the director of special collections at the Cadbury Research Library of the university, said the discovery was significant for Muslim heritage and for the study of Islam.

Thomas said the manuscript would be put on public display, although the fragments were organic and extremely delicate. He said the university had no intention of parting with the manuscript.

The manuscript is part of a collection of more than 3,000 documents from the Middle East amassed in the 1920s by Alphonse Mingana, a theologian and historian who was born in what is now Iraq. His document-gathering expeditions to the Middle East were funded by Edward Cadbury, a member of the famous chocolate-making family.

In Birmingham, which has a large Muslim population, the discovery of the ancient manuscript was greeted with joy.

Muhammad Isa Waley, curator for the Persian and Turkish Section at the British Library in London, said it was an "exciting" discovery.

"We know now that these two folios, in a beautiful and surprisingly legible Hijazi hand, almost certainly date from the time of the first three caliphs," he said. He added that, according to classic accounts, it was under the third caliph, Uthman ibn Affan, that the Quranic text was compiled and the suras edited into the order familiar today.

Thomas predicted that the discovery would make Birmingham a draw for Muslims and scholars. But he noted that Muslims did not require a physical manifestation such as a manuscript to feel close to the Quran, because for many, it was essentially an oral experience to be recited, memorized and revered.

"The Quran," he said, "is already present in the minds of Muslims.
© 2015, The New York Times News Service