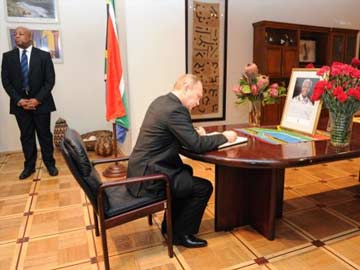 Ref. DV15906Russia's President Vladimir Putin signs the book of condolence as he visits the South Africa's embassy in Moscow, on December 9, 2013

"Without doubt he was a great friend of our people," Putin told reporters as he visited the South African embassy in Moscow to honour the memory of the anti-apartheid icon and Russia's "great friend".

The Russian strongman signed a condolence book and called Mandela "a great humanist" who can be compared to Gandhi and Solzhenitsyn, who was jailed by the Soviet authorities.

"It was our country -- the Soviet Union -- that in the most active manner supported South Africa and other countries in Africa in their fight against racial segregation, their fight for justice and democracy," Putin told reporters.

Promoted
Listen to the latest songs, only on JioSaavn.com
A memorial service was being held Tuesday in South Africa for the anti-apartheid icon, with close to 100 world leaders attending.

Russia was to be represented at the ceremony by Valentina Matviyenko, speaker of the parliament's upper house.