Prosecutor, six others killed in Guatemala 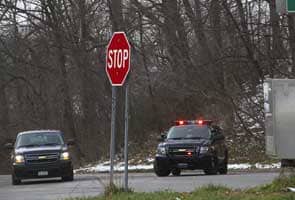 Police officers man a road block on Lake Road following the death of two firefighters in a presumed ambush attack in New York.

Guatemala City: A Guatemalan federal prosecutor and six other people were killed in an attack near the Mexican border blamed on drug traffickers, officials said on Monday.

The attackers burned the bodies of their victims, including Chiquimula prosecutor Irma Olivares, a businessman and the director of a regional government social services agency, said Interior Minister Mauricio Lopez. The bodies of three bodyguards were found in another charred vehicle nearby.

"The modus operandi of the attackers corresponds to drug trafficking groups" operating in the border region, he added.

According to Lopez, the victims were returning from the inauguration of a hotel in La Messilla city.

Promoted
Listen to the latest songs, only on JioSaavn.com
Mexican drug cartels, especially Los Zetas, have expanded their operations to Guatemala, a source of cocaine being smuggled into the United States.

About 42 percent of crimes and acts of violence in Guatemala are tied to drug trafficking, according to government est
Comments
Guatemala