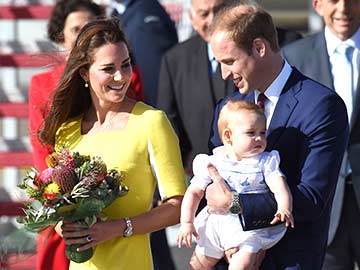 Britain's Prince George (C) is held by his father Prince William (R) as his mother Catherine, the Duchess of Cambridge (L), looks on as they are met upon their arrival from New Zealand at Sydney airport on April 16, 2014.

Sydney: Britain's Prince William and his wife Kate flew into Sydney on Wednesday with their baby son George to kick off the Australian leg of their tour Down Under.

The royals disembarked from an Australian air force 737 under sunny skies after arriving from New Zealand, an AFP photographer said.

A grand reception by the state of New South Wales awaited in the afternoon at the harbor side Opera House, where several thousand onlookers had gathered.

A new poll published on Wednesday showed support for a republic in Australia, where the British queen remains head of state, has dropped to a more than two-decade low.

Some 51 percent oppose switching from a constitutional monarchy to a republic, compared to 42 percent who support it, according to the Fairfax-Nielsen survey of 1,400 people carried out from Thursday to Saturday.

The Duke and Duchess of Cambridge were greeted by crowds in the tens of thousands during their ten-day tour of New Zealand, even in small regional towns such as Blenheim and Cambridge.

The royals visit the Blue Mountains on Thursday, Brisbane on April 19 and Uluru (Ayers Rock) on April 22.

Promoted
Listen to the latest songs, only on JioSaavn.com
They head to Adelaide on April 23 and the capital Canberra on April 24 and 25, before flying home.