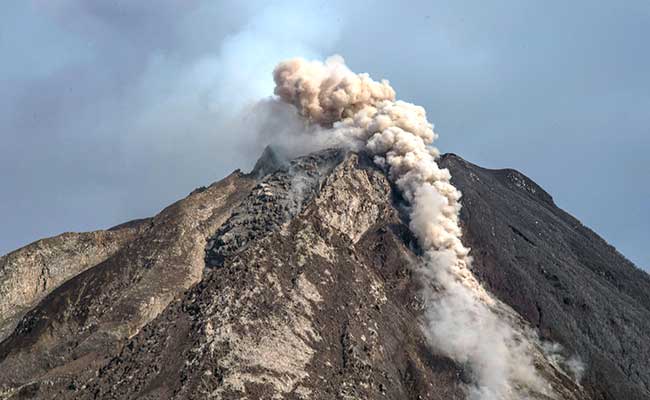 Berastagi, Indonesia: When Indonesian farmer Elfi Dalimunthe fled to safety last week as a volcano hurled hot ash and rocks across the sky, it marked the third time she was forced to abandon her home in recent years.

"I heard a loud booming sound and saw thick ash spewing out," the 30-year-old told AFP, recalling the terrifying eruptions which prompted her family to jump into a bus and onto a motorbike and rush to a temporary shelter.

They are among more than 10,000 people evacuated from their homes this month after an increase in the activity of Mount Sinabung, on Sumatra island, highlighting the precarious existence for many in the country with the largest number of volcanoes in the world.

Indonesia sits on the Pacific Ring of Fire, a belt of seismic activity running around the basin of the Pacific Ocean, and has around 130 active volcanoes.

But millions of poor Indonesians live on or near the slopes of the steaming mountains, where the volcanic soil makes for extremely fertile farmland, and many insist on returning to their villages after even major eruptions.

Dalimunthe fled her small village, just kilometres (miles) from Sinabung, for the first time in 2010 for a few weeks due to an eruption and was then forced from her home in September 2013 for more than a year.

Last year while she was living in a shelter, her wooden house was crushed by falling ash during a deadly eruption.

Despite this disaster, the vegetable farmer returned to the village with her husband and three children and established a new home.

And even after last week's eruption, she insists she will return to her village and not move out immediately, citing the fact her children are at schools in the area.

"I will move when the children are older," she said, sitting on a thin mat in a cramped hall holding about 500 people in the town of Berastagi, where many are sheltering.

Many do not want to evacuate at all when volcanoes erupt violently, with officials facing resistance from villagers who are attached to their houses and farms, and in many cases have little education.

And some who are persuaded to leave insist on returning to their homes under the rumbling volcano during the daytime to tend to the crops of chilli, tomato and potato that grow in the area.

Vegetable seller Syafitri Sitepu fled from her village near Sinabung this week, but said her husband had returned to look after their crops.

"He's our family's breadwinner. If he did not work, how would we be able to feed and buy milk for our baby?" said the 30-year-old.

The increase in Sinabung's activity has been sudden and dramatic. Clouds of hot gas and rocks, as well as molten lava, cascaded down the volcano's slopes in the past week, and officials warn there is a strong chance of more eruptions.

As well as evacuating people, authorities' immediate concern is getting hold of tents, blankets, clean water and clothing for the thousands forced from their homes, as well as providing counselling to those left traumatised.

Even for those who have not been evacuated from their homes, the eruptions can be highly disruptive. Thick ash has blown over a great distance, coating crops and buildings and forcing people to wear face masks for protection.

In addition, the economic impact of Sinabung has been devastating, with the national disaster agency estimating it caused more than $100 million in damage over two years, in 2013 and 2014.

While some return to their villages as soon as they can, not everyone wants to go back to an uncertain future. But sometimes there is no choice, with under-resourced local authorities unable to provide decent, new homes.

Rosalinda, a 55-year-old who was recently evacuated and like many Indonesians goes by one name, said that she would like her village to be relocated but the government is yet to take any action.

"We need money to move so we have to sell our homes first," she said, "but who wants to buy our houses?"