"It is a bomb cyclone, the second we've had," said Brian Hurley, a meteorologist with the weather service's Weather Prediction Center in Maryland. "This is like a slow-moving snowstorm inside a hurricane." 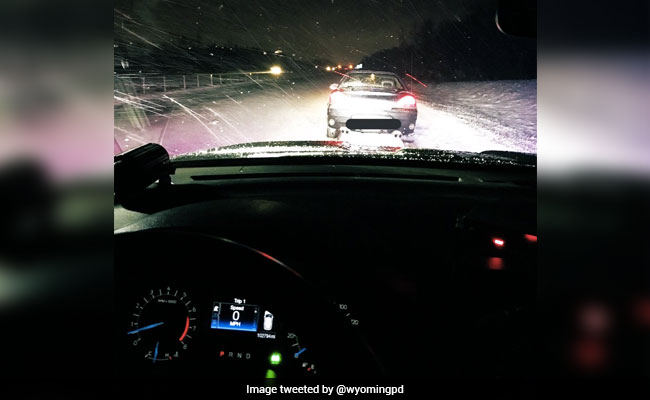 There was widespread power outages, road closures and treacherous driving.

A "bomb cyclone" blizzard, the second in a month, hit the Rockies on Wednesday and spun into the U.S. Plains and Midwest, bringing fears of more flooding in areas still recovering from last month's deluge.

"It is a bomb cyclone, the second we've had," said Brian Hurley, a meteorologist with the weather service's Weather Prediction Center in Maryland. "This is like a slow-moving snowstorm inside a hurricane."

Denver International Airport reported that about half its flights, 755, were cancelled Wednesday and into early Thursday, but all runways remained operational.

More than 10,000 homes and businesses were without power in South Dakota and about another 10,000 in Minnesota early Thursday, according to the tracking site PowerOutage.Us.

In March, another "bomb cyclone," which involves a rapidly intensifying cyclone, triggered heavy rain over the region and combined with melting snow to cause flooding along the Missouri River and its tributaries. More than $3 billion in damage was done to property and crops in Nebraska and Iowa alone.

"The heaviest snow so far is piling up in South and North Dakota, with some areas getting 17 inches, and more is on the way," he said. "We're expected another 10 to 15 inches before this is done."

That snow adds to the woes of the Midwest farmlands, which in recent weeks saw record flooding that washed out crops and drowned cattle.

"All that snow is going to melt sooner rather than later, and it'll all flow into the Missouri River basin," Hurley said.

The weather system is expected to weaken and move to the Great Lakes area on Friday, bringing rain and snow to that region, the Weather Service said.

(Except for the headline, this story has not been edited by NDTV staff and is published from a syndicated feed.)
Comments
Bomb Cyclone USUS Blizzard