The storm taking shape is expected to develop rapidly Wednesday. 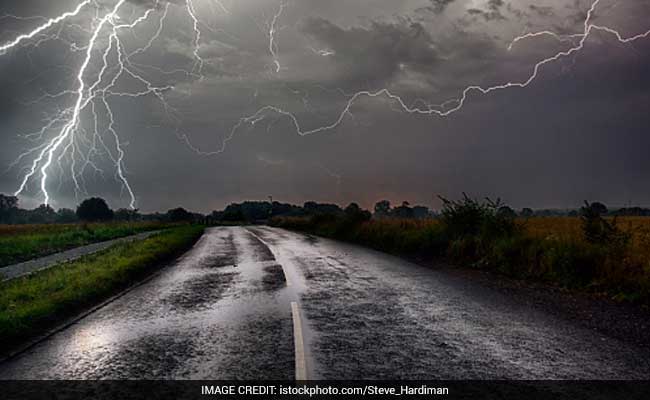 A number of areas could get thundersnow and strong winds. (Representational)

A major storm is on the way for nation's midsection Wednesday and Thursday. Depending on location, it will generate blinding snow, heavy rain, powerful winds or a combination.

Blizzard warnings have been issued in the northern Plains, with winter storm warnings from the Continental Divide to the Great Lakes. To the south, a major wind storm is gathering steam. Severe thunderstorms and flooding will also be risks from this storm.

The earliest signs of pressure drops, indicating a developing storm, were occurring to the east of the Rockies on Tuesday.

While the storm intensifies slowly, it is expected to gain strength rapidly Wednesday morning and could set a record low for pressure in April.

A number of areas could get thundersnow; strong winds and snow will create treacherous conditions with limited visibility.

The high temperature in Denver is forecast to be near 80 degrees Tuesday. Rain will turn to snow Wednesday. A winter storm watch for the city suggests that about 3 to 6 inches of precipitation will fall there, with wind gusts of above 30 mph Wednesday night.

North Platte, in south central Nebraska, is expecting 8 to 12 inches of snow. To the north, win gusts are expected to be about 50 mph.

South Dakota's capital, Pierre, is to be under a blizzard warning Wednesday afternoon through predawn Friday, when a foot to 1 1/2 feet of snow is forecast

"A potentially historic storm will bring severe impacts," the Weather Service office serving the Twin Cities said in a recent update. Minneapolis may pick up 6 to 12 inches, but widespread totals of 1 1/2 to 2 1/2 feet are expected in southwestern parts of the state.

Heavy wind and a fire threat

Like March's bomb cyclone, this storm seems likely to affect weather in a majority of the country as it spreads.

Albuquerque, New Mexico, is under a red-flag warning for high fire danger. So is much of the state, the high plains of Colorado as well as Kansas and Texas. Wind gusts are expected to top 50 mph through Wednesday.

The Texas panhandle and Amarillo are close to ground zero for wind. Sustained winds as high as 40 to 50 mph are possible in this region Wednesday, with gusts as high as 70 mph. In addition to extreme fire danger, flying dust is likely.

Cities like Wichita, Kansas; Oklahoma City, Oklahoma; and Dallas will have gusts of about 40 mph in the wake of the storm, but very little if any rain will fall.

Even with a limited moisture supply, some powerful thunderstorms are possible, although they likely will cover small swaths.

Thunderstorms are projected to develop near the Kansas-Nebraska border Wednesday, eventually heading toward Iowa. The primary risk is hail and damaging winds. There is also some potential for an isolated storm or two to form across northern Kansas, which may bring tornadoes.

The severe weather threat moves east through the Midwest on Thursday. A focus may be Illinois and Indiana, where a line of storms is likely to threaten damaging gusts.

About 1.5 inches of snow and rain is expected to fall from western South Dakota, through southern Minnesota and across southern Wisconsin, northern Nebraska and Iowa. Some spots could get 2 to 3 inches.

Snow is likely to melt rapidly under moderate temperatures.

The James River, the Big Sioux River and the Minnesota River may flood. While temperatures are expected to be low in the wake of the storm, readings above freezing will arrive next week.

Near Hawarden, Iowa, on the Big Sioux, major flooding occurring now is forecast to dip, but significant rises are expected once warmer temperatures move in and snow melts. Renewed major flooding, especially near rivers, will likely be the story in other spots in the Plains and Midwest next week.