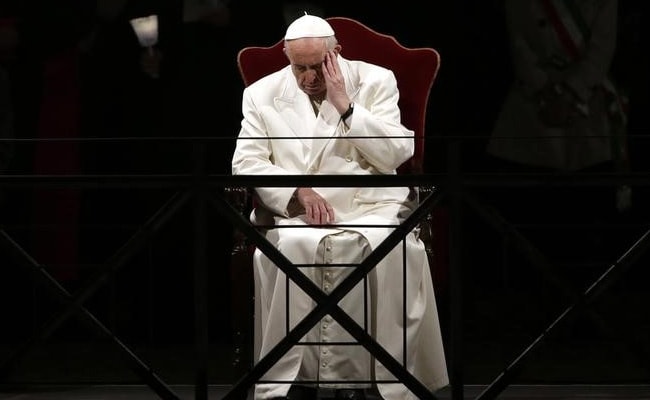 At the end, Pope read a prayer he wrote that was woven around the theme of shame and hope.

Rome: Pope Francis, presiding at a Good Friday service, asked God for forgiveness for scandals in the Catholic Church and for the 'shame' of humanity becoming inured to daily scenes of bombed cities and drowning migrants.

Pope Francis presided at a traditional candlelight Via Crucis (Way of the Cross) service at Rome's Colosseum attended by some 20,000 people and protected by heavy security following recent attacks in European cities.

Pope sat while a large wooden cross was carried in procession, stopping 14 times to mark events in the last hours of Jesus' life from being sentenced to death to his burial.

Similar services, known as the Stations of the Cross, were taking place in cities around the world as Christians gathered to commemorate Jesus' death by crucifixion.

At the end of the two-hour service, Pope read a prayer he wrote that was woven around the theme of shame and hope.

In what appeared to be a reference to the Church's sexual abuse scandal, he spoke of "shame for all the times that we bishops, priests, brothers and nuns scandalised and wounded your body, the Church."

The Catholic Church has been struggling for nearly two decades to put the scandal of sexual abuse of children by clergy behind it. Critics say more must be done to punish bishops who covered up abuse or were negligent in preventing it.

Pope also spoke of the shame he said should be felt over "the daily spilling of the innocent blood of women, of children, of immigrants" and for the fate of those who are persecuted because of their race, social status or religious beliefs.

At the end of this month Francis travels to Egypt, which has seen a spate of attacks by terrorists on minority Coptic Christians. Dozens were killed in two attacks last Sunday.

He spoke of "shame for all the scenes of devastation, destruction and drownings that have become ordinary in our lives."

On the day he spoke, more than 2,000 migrants trying to reach Europe were plucked from the Mediterranean in a series of dramatic rescues and one person was found dead. More than 650 have died or are unaccounted for while trying to cross the sea in rubber dinghies this year.

Pope Francis expressed the hope "that good will triumph despite its apparent defeat."

Security was stepped up in the area around the Colosseum following recent truck attacks against pedestrians in London and Stockholm. Some 3,000 police guarded the area and checked people as they approached. The Colosseum subway stop was closed.

Pope on Saturday is due to say an Easter vigil Mass in St. Peter's Basilica and on Easter Sunday, the most important day in the Christian liturgical calendar, he reads his twice-annual "Urbi et Orbi" ("To the City and the World") message in St. Peter's Square.