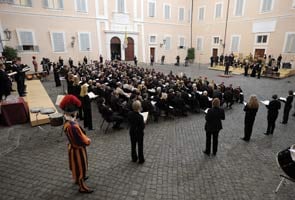 Vatican City: A Vatican computer technician will go on trial on Monday on charges of helping the pope's former butler steal papers, in a case that could expose other whistle-blowers within the secretive Holy See.

Claudio Sciarpelletti's trial follows the conviction of ex-butler Paolo Gabriele, who was sentenced to 18 months in jail last month after he admitted leaking papers alleging corruption and Machiavellian politics in the Vatican.

The 48-year-old technician was arrested on May 25 as the investigation into the leaks unfolded but was released the following day.

He is accused of aiding and abetting Gabriele.

It was a suspicious envelope addressed to Gabriele in Sciarpelletti's desk that first drew investigators' attention to the computer expert.

In it, they found photocopies of memos published by Italian investigative journalist Gianluigi Nuzzi in his book "His Holiness", which collected together letters depicting infighting within a corrupt Vatican.

The book touched on everything from fraud allegations to sex abuse scandals.

Called to account, Sciarpelletti's testimony was confused and contradictory.

He said Gabriele had given him the envelope because he wanted his opinion on the contents, but that he had never opened it and had forgotten it was there.

He later said it was someone else entirely that had given him the envelope -- a person identified in court documents only by the letter "W" which he was supposed to pass on to Gabriele, but which lay forgotten in his desk.

He also talked about a second envelope, given to him by a certain "X".

The trial will likely delve into the relationship between the butler and the technician. Gabriele now serving time in a holding cell within the Vatican is expected to take the stand to testify to their close friendship.

Sciarpelletti, however, insists they were no more than acquaintances.

The Vatican has already said Sciarpelletti's alleged role in leaking the memos is "marginal" and that he would face only a light sentence if convicted after a trial likely to be shorter than Gabriele's, which lasted a week.

Religious watchers hope Sciarpelletti's turn in the dock will shed light on issues left hanging by the butler's trial -- one of the most pressing being whether Gabriele really did act alone, as he claims.

The butler's trial hinted at the jealousies and tensions under the surface in the Vatican's tight-knit community, more details of which may now emerge.

Sciarpelletti's trial may reveal the identities of "W" and "X", who could be among the 20 or so like-minded people the butler said there were in the Vatican or could include a priest to whom Gabriele gave copies of the leaks.

When the scandal first broke in March, there was much speculation over whether Gabriele could have orchestrated such a large operation alone and some suspected a bid by power-hungry cardinals to shake up the Vatican's hierarchy.

While the Vatican's Secretariat of State, the government of the Roman Catholic Church, said Gabriele's trial "revealed as unfounded speculation over the existence of a plot and involvement of others", critics accused the world's smallest independent state of not probing deeper in order to hush up the affair.

The findings of a parallel inquiry into the "Vatileaks" scandal conducted by a committee of cardinals appointed by the pope have also not been made public, leading to accusations of a cover-up.

"Vatileaks: the sums do not add up", the Vatican Insider newspaper said as the Holy See geared up for the second chapter in the biggest court drama in its modern history.
Comments
Vatican City scandal