Police monitoring and a climate of fear 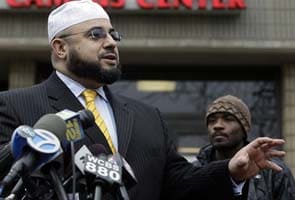 Newark: The counterman at the Jordan Halal Restaurant, a greasy spoon of a greasy spoon on South Orange Avenue, tossed up his hands as I pulled out my press card. No, no, he doesn't want to speak, please no.

Behind him, his cook, a short block of a man in white apron, whipped up a "pastromi and eggs," as the menu would have it.

"I love here, so I leave this alone," the counterman tells me. "Say I love this place, please."

The counterman and his cook, as the New York Police Department's Intelligence Division describes them in a secret report on Newark, are "persons of Jordanian descent." There is another way to describe them: they are American citizens in the throes of a rather un-American fear of speaking.

"I talk, they keep coming," the counterman says, wagging his head, apologetic. Our conversation has finished.

"They" are undercover New York City officers. Last week, The Associated Press broke the news that the Intelligence Division of the New York police had extended its writ hundreds of square miles east and west, carefully detailing mosques, dollar stores and restaurants, from Konak's Turkish Cuisine in Farmingville, on Long Island, to this luncheonette on the western edge of Newark. They carefully recorded names, license plates and nationalities.

More than 10 years has passed since towers crashed, and dust and human biomass fell as snow across a city. Our wounds can appear healed, but the revelations of last week suggest we are more fractured, and perhaps more angry, than we realized.

As for the complaints of Yale's president? "I don't know," Mr. Bloomberg said, "why keeping the country safe is antithetical to the values of Yale."

New York's politicians, with a few exceptions, galloped in behind. Senator Charles E. Schumer defended the police, as did Gov. Andrew M. Cuomo.

The Daily News columnist Mike Lupica scored with Mr. Kelly, who gave the back of his hand to New Jersey's political class. "As far as I can tell, it was a knee-jerk response," the commissioner told him. "Maybe it was just political instincts at work."

MR. LUPICA, a tough-guy typist, offered a coda. Of Mr. Kelly, he opined, "not only should he not apologize for doing that, he should tell any politician who doesn't like it" to bug off, though he puts it more crudely.

The New York Post as ever went three yards beyond. It published an arsonist's bonfire of a cartoon. It showed three hook-nosed, bearded and turbaned terrorists, one of whom is calling The A.P. to complain of police spying.

It's necessary to repeat this: We have been attacked, and it could happen again. Mr. Kelly and Mr. Bloomberg live with an awareness of the terrible possibility that most of us long ago suppressed. Yet, this may not confer immunity against tough questions, not the least of which is what sort of "leads" justify monitoring hundreds of thousands of people.

On Friday, I stepped out of Masjid Mubarak, a small, whitewashed mosque on Camden Street that serves Newark's growing Nigerian community. Men and women smiled and bowed, and corralled their children.

My phone rang; it was Mayor Cory A. Booker. He is a most careful politician. He butters hedge funders, laughs with the bumptious Republican governor and considers Mr. Bloomberg "a dear and trusted friend."

He speaks eloquently of Mr. Bloomberg's conviction that an attack must not happen again. "I understand the space he lives in," Mr. Booker says.

And yet, he has heard from his Muslim constituents, who call in anger and pain. "I'm watching what this has done," he said. "It's created lines of suspicion that are destructive.

"I'm a prisoner of hope; maybe we can emerge with a greater exaltation of our rights," he says.

Promoted
Listen to the latest songs, only on JioSaavn.com
But right now? He pauses.