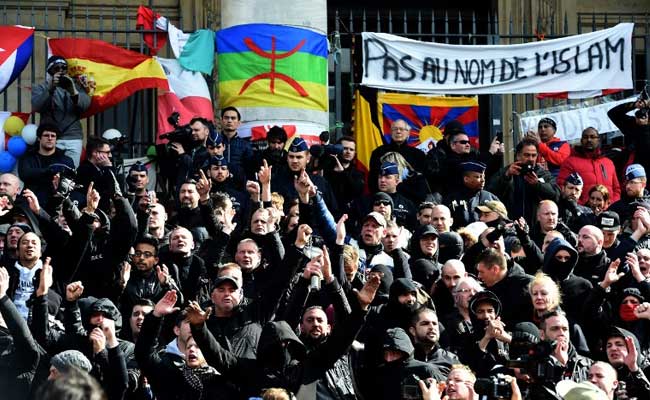 Far-right football hooligans chant slogans as they arrive outside the stock exchange in Brussels on March 27, 2016. (AFP Photo)

Brussels: Riot police fired water cannon today at far-right football hooligans who invaded a square in the Belgian capital that has become a memorial to the victims of the Brussels attacks, an AFP journalist said.

Police took action after about 200 black-clad hooligans shouting nationalist and anti-immigrant slogans moved in on the Place de la Bourse where people were gathering in a show of solidarity with the victims.

An AFP journalist saw at least one of the protesters taken into custody, with scores of police present backed up by their massive blue and white water cannon trucks.

"This is our home" and "The state, Daesh accomplice," the hooligans shouted in unison, using an alternate term for the Islamic State group that claimed Tuesday's suicide bombings in Brussels that killed 28 peoples.

Scores of people were gathered around the mass of flowers, candles and messages that have been left in front of the ornate former Brussels stock exchange which has been draped in flags and messages of support and sympathy.

"We are football hooligans, we don't have anything to do with politics," said Andres, one of the demonstrators. "We are here for the victims and to pay our respects."

In the grieving Belgian capital, a defiant "March Against Fear" had been planned for Sunday from the Place de La Bourse but was called off after authorities said the mass gathering could draw much-needed resources away from the investigation into the attacks.

Hong Kong Is Tracing Covid In Sewage. Here's Why