Pilot Dangles From Power Line For 2 Hours After Plane Crash In France, Saved

Parts from the stricken plane, which was not carrying weapons and was flying from Belgium to a French base on a training mission 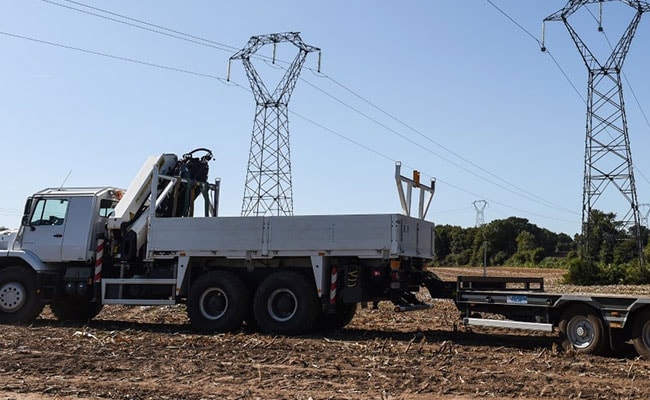 The pilot was cut loose from power cord after a 2-hour rescue effort.

An F-16 fighter jet of the Belgian air force crashed Thursday in western France, with both pilots successfully ejecting but one spent two hours hanging from a power line before being cut down, officials said.

Parts from the stricken plane, which was not carrying weapons and was flying from Belgium to a French base on a training mission, crashed into houses in the Morbihan region around the town of Pluvigner. No one on the ground was hurt.

"The pilot and the co-pilot were able to eject before the crash. They were both located and are alive," the office of the state representative for the region said in a statement.

It said one pilot had been rescued but the other had become tangled with a high-voltage power line and was left hanging from his parachute.

The pilot was finally cut loose after a two-hour rescue effort, the statement said.

"It was a sensitive and long operation," said senior local official Pierre Clavreuil at a news conference in Pluvigner. "It needed a lot of sangfroid," added Cyrille Berrod of the Morbihan fire brigade.

Images published in local media showed the pilot dangling from the cords attached to the parachute several metres above which had been ensnared by a cable next to the electricity pylon.

The plane had taken off from Belgium and was heading on a training mission to a French naval airbase close to the town of Lorient.

The Belgian air force commander Frederik Vansina told reporters in Brussels that the incident appeared to have been caused by an engine problem with the plane, which was built in 1983, but that an investigation would provide further details.

He said both pilots were in hospital but should return to their families in Belgium as soon as this evening.

"The lady in the house was in a state of shock and taken to hospital," he said.

Pluvigner resident Patrick Kauffer told the local Le Telegramme daily that the "wing of the plane took out part of the roof of our house. The damage was serious."

He said the crash also set ablaze his shed and some trees.

"I am relieved that our two pilots are safe and sound after the crash of the F-16 and there was no victim on the ground," Belgium's Foreign and Defence Minister Didier Reynders said on Twitter.

The Belgian military "will take care of them and their family. An investigation is under way," he added.

(Except for the headline, this story has not been edited by NDTV staff and is published from a syndicated feed.)
Comments
Air Force PlanePlane crash