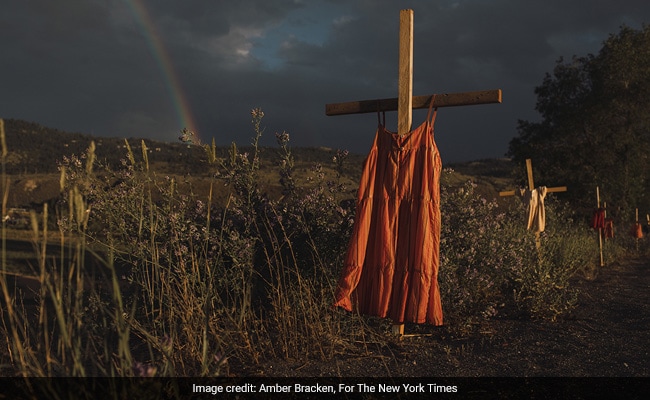 A poignant image of girls' dresses draped on crosses near Kamloops in Canada, where the remains of some 215 children were found last year on Thursday won the 2022 World Press Photo of the Year award.

Edmonton-based documentary photographer Amber Bracken shot the evocative picture which a judge said "is the kind... that sears itself into your memory and inspires a kind of sensory reaction."

To the right, little girls' dresses in red and ochre hang on crosses next to a highway at Kamloops, a small city in British Columbia, once the venue of a so-called residential school -- set up a century ago to forcibly assimilate Canada's Indigenous population.

Presenting the global winners of the #WPPh2022 Contest:
- ‘Kamloops Residential School' by @photobracken
- ‘Saving Forests with Fire' by @mattabbottphoto
- ‘Amazonian Dystopia' by Lalo de Almeida
- ‘Blood is a Seed' by Isadora Romero
Discover their work: https://t.co/KfNB2zECVapic.twitter.com/mPRvlb3EXS

To the left, a rainbow lands near where the mass grave was discovered last year, the first in a series that forced Canadians to confront their painful past.

Bracken's picture for the New York Times comes as Pope Francis on Friday apologised to Indigenous communities for the abuse committed at church-run residential schools in Canada.

Numerous investigations into the former residential schools are underway across Canada after the discovery of mass unmarked graves, with more than 4,000 children believed to be missing, according to authorities.

Bracken's photo was "a quiet moment of global reckoning for the history of colonisation, not only in Canada but around the world," said Rena Effendi, one of the judges.

"It's a huge honour to win it, but I feel it's not a photo that could possibly belong to me," Bracken, 38, told news agency AFP.

"It was a representation of something that was created by the community to honour and remember their lost children," said Bracken.

This year's winning photographs continued in the theme of highlighting the world's Indigenous communities.

Australian documentary lensman Matthew Abbott took the first prize in the Story of the Year category with a series of blazing images, showing how the native Nawarddeken people of the remote Arnhem Land used fire as a land-management tool to combat climate change.

By a practice called "cool burning", Indigenous Australians help prevent wildfires -- which has devastated other parts of Australia due to increased heatwaves -- thereby reducing the output of climate-heating carbon dioxide.

"This has been done for tens-of-thousands of years, but now with the climate changing so rapidly, these practices are now being fully tested," Abbott told AFP.

In other categories, Brazilian veteran photographer Lalo de Almeida won the Long Term Project Award for his pictures the impact of deforestation of the Amazon on Indigenous communities.

In the Open Format Award, Isadora Romero won for her video exploring her family history in Columbia.

Global winners each receive a 6,000-euro ($6,500) reward and their work is to be exhibited in from April 15 in Amsterdam before being shown around the world.