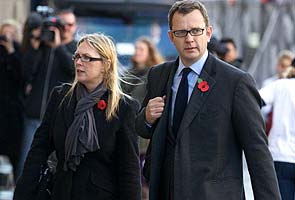 London: The first trial from the phone-hacking scandal that sank Rupert Murdoch's News of the World opened today with his key aide Rebekah Brooks and the prime minister's former media chief Andy Coulson in the dock.

They are among eight defendants facing a jury for the first time over the scandal two years ago that rocked the British newspaper industry and sent shockwaves through the British establishment.

Brooks, 45, arrived at the Old Bailey court in London to a storm of photographers' flashes, accompanied by her racehorse trainer husband Charlie, who is also on trial.

Dressed in a camel-coloured coat, Brooks looked relaxed and smiled as she walked into the court building, while her husband wore a smart blue suit.

The defendants face charges ranging from illegally hacking the mobile phone voicemails of 600 people including a murdered schoolgirl and celebrities such as Paul McCartney and Jude Law, plus bribing public officials for stories and hiding evidence.

The trial was originally scheduled to last four months, but due to its complexity it could now run for six months.

The jury is expected to hear explosive testimony about the scandal that forced Australian-born Murdoch to shut down the News of the World in disgrace in 2011, and threatened to drag in Prime Minister David Cameron's government.

The trial formally opens on Monday, but the prosecution's opening statement is expected to come later in the week as the day will be taken up with jury selection.

The main players are Brooks, the flame-haired former chief executive of Murdoch's British newspaper operations, and Coulson, the savvy tabloid journalist who became director of communications for Cameron.

Brooks, who rose from a secretary to edit the News of the World and its daily sister paper The Sun and became one of Murdoch's closest confidantes, denies phone hacking, conspiracy to commit misconduct in a public office, and perverting the course of justice.

Her 50-year-old husband, her personal assistant Cheryl Carter, 49, and former News International security chief Mark Hanna, 50, deny obstructing justice along with Brooks herself by concealing evidence in the frantic last days of the News of the World.

Also on trial are former News of the World managing editor Stuart Kuttner and head of news Ian Edmondson, who both deny phone hacking.

The final defendant is the paper's royal editor Clive Goodman, who is charged along with Coulson for bribing officials and also pleads not guilty.

A public inquiry ordered by Cameron and led by judge Brian Leveson heard evidence on the scandal, but it is the first time that criminal charges will be put to the alleged key players.

The scandal erupted in July 2011 with revelations that the News of the World had hacked the mobile phone voicemails of Milly Dowler, a missing 13-year-old girl who was later found murdered, and led to the closure of the paper after 168 years in print.

At the time of the hacking revelations, Conservative leader Cameron faced questions about his employment of Coulson, who was his media chief from 2007 until 2011, as well as his friendship with Brooks and her husband.

The eight people on trial are among dozens arrested as part of a huge, multi-faceted police investigation into criminal practices by Britain's famously raucous press.

The shockwaves from the scandal are still being felt two years later.

Britain's newspaper industry is fighting the introduction of tough regulatory measures in the wake of the Leveson Inquiry.

The papers are threatening to take legal action to challenge the government's plan for a press standards body backed by a so-called "royal charter".

Promoted
Listen to the latest songs, only on JioSaavn.com
They say the plan is tantamount to state regulation of the press.