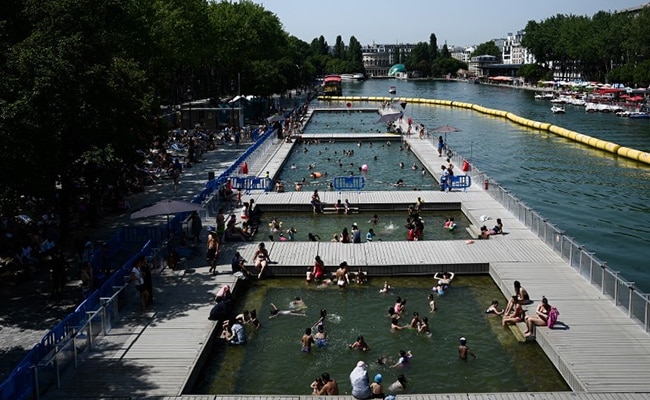 People cool off at floating pools set up on the Ourcq canal in Paris. (AFP)

Paris on Thursday baked in an all-time high temperature of over 42 degrees Celsius as a ferocious heatwave smashed records across northern Europe, sparking concerns about public health and new misery for rail travellers.

Records also tumbled in Belgium, the Netherlands and Germany while Paris saw its highest ever temperature of 42.6 degrees Celsius (108.7 Fahrenheit), beating the previous top of 40.4C (104.7F) set in July 1947.

Trains have been slowed in several European countries to avoid damage to the railway networks and French national operator SNCF urged travellers to delay journeys planned for Thursday.

In the sweltering French capital, tourists and locals alike made a beeline for fountains and even pools laid on by the authorities next to the Ourcq canal in the north of the city.

Authorities have warned people to keep an eye on those living alone and also to beware of taking the plunge to cool down after a spike in drownings.

The scorching weather spelled misery for millions of commuters on public transport.

"Its so hot in the metro, it's unbearable. There are so many people, no air conditioning and everyone is on top of each other," said Paris commuter Petra Ulm, 34, a clinical researcher.

The heatwave, which was expected to ease up on Friday as rain and thunderstorms move in, had again focused public attention on the problems caused by climate change.

"Great day on the beach"

Those lucky enough to be by the sea could still enjoy the weather.

"It's obviously not so good for some people, but if you've got the day off and young kids then it's great for a day on the beach," said Graham Clarke, 50, an insurance agent, enjoying the sands of Broadstairs in southeast England.

The Netherlands, which broke a record dating back to 1944 on Wednesday, hit a new high Thursday of 40.4C in the south. 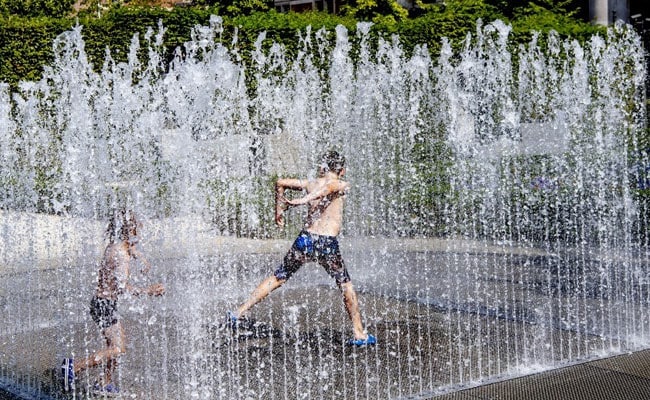 People play in a fountain at the Museumplein square in Amsterdam. (AFP)

Belgium on Thursday also reached a new record high of 40.6 degrees Celsius (105F), on the Kleine-Brogel military base, in northeastern Belgium.

Two suspected drug smugglers had to call police in the Belgian port city of Antwerp after becoming trapped in a shipping container filled with cocaine, prosecutors said.

Hundreds of travellers were stuck on trains in sweltering conditions outside Paris for several hours late Wednesday after an electrical fire halted traffic in and out of the Gare de l'Est station in Paris.

Eurostar and Thalys services from Brussels to London and Paris also experienced major delays and cancellations after cable failure the day earlier.

"I ask everyone who can avoid or delay their journeys to do so," said French Environment Minister Elisabeth Borne, advising workers who could do their jobs at home not go to their offices.

The northern third of France, including Paris, was under a red alert while the rest of the country had a yellow warning and water-use restrictions were in force.

In Austria, a three-year-old child died of dehydration after going to sleep in a car parked in full sunshine at the family farm, local authorities said.

France remains haunted by the early summer of 2003 when 15,000 deaths were blamed on the heat and the authorities were bitterly criticised for not mobilising fast enough.

"We need to take care of ourselves but above all others especially those who are alone, and be able to detect the first symptoms of heatstroke," said Prime Minister Edouard Philippe.

Local authorities have placed restrictions on water usage in many areas due to drought-like conditions that have seen ground and river water levels fall dramatically.

This summer's second heatwave has amplified concerns in Europe that human activity is heating the planet at a dangerous rate.

The June 26-28 blast of heat in France was four degrees Celsius (7.2 degrees Fahrenheit) hotter than an equally rare June heatwave would have been in 1900, the World Weather Attribution (WWA) team said this month.

One study by the Swiss Federal Institute of Technology said the deadly, weeks-long heatwave across northern Europe in 2018 would have been statistically impossible without climate change.