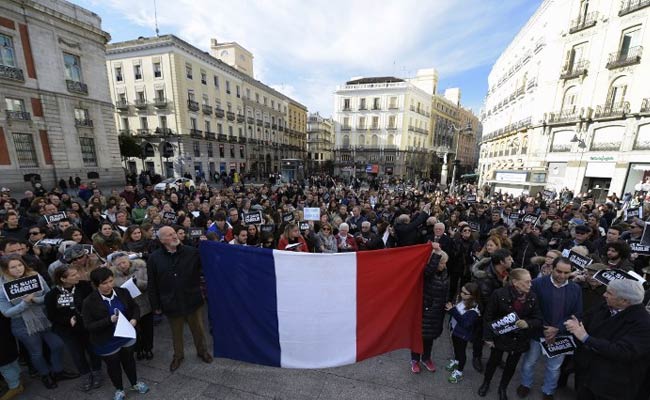 People hold placards reading in French "I am Charlie" behind a French flag during a public show of solidarity in Madrid on January 11 and to protest thge attacks in Paris. (Agence France-Presse)

Madrid: Spain wants to see the Schengen treaty modified to allow border controls to be restored to limit the movements of Islamic fighters returning to Europe from the Middle East, a report said on Sunday.

"We are going to back border controls and it is possible that as a consequence it will be necessary to modify the Schengen treaty," Interior Minister Jorge Fernandez Diaz told the daily El Pais ahead of a Sunday morning ministerial meeting on the subject in Paris.

EU and US security ministers met at France's interior ministry on Sunday to work out a joint response to the threat of jihadist attacks following days of carnage in Paris by three gunmen claiming to act on behalf of Al Qaeda and the Islamic State group.

"The existing mobility in the European Union is facilitating the movements (of jihadists) to any country and also to our country," the minister was quoted as saying.

The gathering was being held just hours ahead of a massive public rally in Paris against terrorism that was to be attended by dozens of world leaders.

A US Justice Department official said ahead of the meeting that it would "include discussions on addressing terrorist threats, foreign fighters and countering violent extremism."

Promoted
Listen to the latest songs, only on JioSaavn.com
The March 1995 Schengen agreement removed passport checks on the EU's internal borders. A total 26 European nations currently have signed the Schengen agreement, 22 of them EU members.