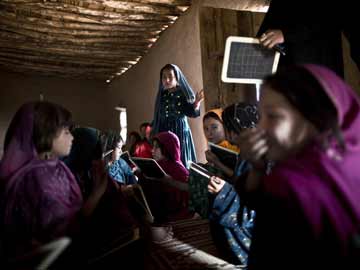 Chancher Redhar, Pakistan: In a decrepit white-walled classroom in southern Pakistan, Bushra valiantly struggles to keep discipline as a dozen girls run and scream around her. With no teacher for the past eight months, the 10-year-old has been forced to step in.

"I teach them lessons from the Koran, I teach them Sindhi, I teach them to count one-two, I teach them the alphabet A-B-C-D," said Bushra, wearing a traditional nose stud and a scarf around her head. She says she dreams of becoming a doctor and learning about computers.

But her academic ambitions risk being scuppered after her own teacher fled. Authorities have not appointed a new one, making Bushra's situation typical for a student at one of Pakistan's 7,000 so-called "ghost schools", where no formal classes can be taught.

These abandoned pupils are part of a growing education crisis in the country where, according to the United Nations, over five million children do not attend primary school.

"The last teacher told us she would stop coming if we did not pay for her transportation to the village," said Salim Samoon, who has seven granddaughters at the school catering for the roughly 600 residents of Chancher Redhar, a village two hours drive from Karachi in the south of Pakistan.

"But we have no money and the authorities have not appointed a new teacher," he said.

The southern village is far from the notoriously conservative parts of northwest Pakistan near the Afghan border, where Taliban attacks against public schools are commonplace.

Schoolgirl Malala Yousafzai become an international symbol of the right to education for all after surviving a 2012 Taliban attack in which she was shot in the head.

But the damage caused by "ghost schools" across Pakistan, such as the one in Chancher Redhar, is self-inflicted and potentially greater: a new generation of children growing up without an education, either because the schools have been abandoned, destroyed, or because teachers are not turning up.

"Maybe the media highlights the bombings of schools more because it is visible. But this is a more dangerous problem," said Rahmatullah Balal of the NGO Ailaan Alif, who has published a ranking of districts in terms of the quality of education available.

According to his ranking, the district of Thatta, home to Bushra and her classmates, lies in 140th position out of a total of 144, behind Taliban hideouts in the northwest.
Teachers paid to stay home

Alerted last year to the problem of "ghost schools," the Supreme Court of Pakistan asked provinces to scrutinise institutions that took students and were officially regarded as schools. The results, released in late November, where shocking.

"In most of the basic teaching units of the district, the situation is very alarming," the report said.

"Most of these schools are teaching institutions only in name, but virtually no student is being admitted there to seek education and the teaching staff is taking salary at home."

Along with teachers who received salary but did not teach, other schools failed to appoint teachers, were appropriated by wealthy landowners, or had budget irregularities, such as "paid-for" computers which never arrived.

"The government and bureaucrats have no willingness to solve the problem," said Balal.

"The money that the government gives to the school is consumed by bureaucrats. The budget might tell you what the money has been used for in the schools, but you don't see it get spent and then the money is gone."

He says school funds are split "50-50" between feudal lords and bureaucrats, partly to ensure that there is no threat to the feudal lords' power base by seeing the poor receive education.
'Admit to the problem'

Those politicians who are actively trying to raise the issue say that it is not a priority for the government.

"We have to invest in our education because it is the only way to get progress," said Humera Alwani of the Pakistan Peoples Party.

"You have to admit to a problem before you can correct it," she said.

The existence of "ghost schools" also removes incentive for poor families to ensure their children get an education. Instead, many see more value in sending them to work in the fields or bazaars.

"I do not like this school, this is why I do not go," said Arbab, not yet a teenager.

"I go to fetch and buy water, and then I sell it."

Local residents worry another generation will grow up without the skills they need.

Promoted
Listen to the latest songs, only on JioSaavn.com
In the cramped class, Bushra's attempted lesson is over in just a few minutes, ending with a rendition of the national anthem.

Then the girls continue to play as they have done every day since their teacher left, waiting for the arrival of another who may never come.