Despite orders from the civilian government to the army on Saturday night to help restore order, no troops were at the scene around the protest camp in Faizabad, on the outskirts of the capital, witnesses said. 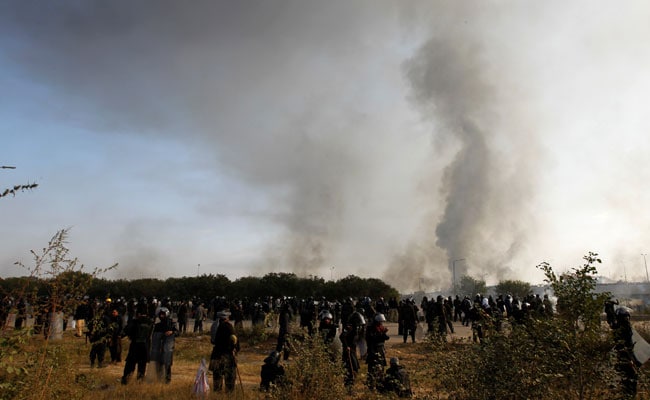 At least 150 people were wounded in Saturday's clashes, hospitals reported.

FAIZABAD: Islamist party activists on Sunday clashed with Pakistani security forces for a second day outside the capital, Islamabad, burning vehicles before withdrawing into an uneasy stand-off at a protest camp they have occupied for two weeks, police said.

Despite orders from the civilian government to the army on Saturday night to help restore order, no troops were at the scene around the protest camp in Faizabad, on the outskirts of the capital, witnesses said.

The military's press department did not respond to queries about the government's order.

According to media reports at least six people were killed on the previous day, when several thousand police and paramilitary forces tried to disperse the religious hardliners, who have blocked the main route into the capital demanding that the law minister be fired for committing blasphemy.

At least 150 people were wounded in Saturday's clashes, hospitals reported, and police superintendent Amir Niazi said 80 members of the security forces were among those casualties. Reuters could not confirm that there had been any deaths.

Smoke billowed from the charred remains of a car and three motorcycles burned that morning near the Faizabad protest camp, where several thousand Tehreek-e-Labaik activists have gathered in defiance of the government.

After the early morning clashes, the area settled into an uneasy stand-off. The paramilitary Rangers force - which had held back from Saturday's confrontation - was in charge of Sunday's operations, officers said.

Activists from Tehreek-e-Labaik have blocked the main road into the capital for two weeks, accusing the law minister of blasphemy over a wording change in electoral law the party says weakens the Islamic tenet of Mohammad as God's final prophet.

"We will not leave. We will fight until end," Tehreek-e-Labaik party spokesman Ejaz Ashrafi told Reuters on Saturday.

While Islamist parties are unlikely to win a majority they could play a major role in elections that must be held by the summer of next year.
Tehreek-e-Laibak was born out of a protest movement lionizing Mumtaz Qadri, a bodyguard of the governor of Punjab province who gunned down his boss in 2011 over his call to reform strict blasphemy laws. Party leader Rizvi called Qadri, who was executed last year, "a hero" in a September interview with Reuters.

By Sunday afternoon, private TV stations that had been ordered off the air the day before were broadcasting again. Facebook, Twitter and YouTube remained blocked in many areas.

After Saturday's failed crackdown by police, the government called for military assistance "for law and order duty according to the constitution".

However, there has been no public statement from the military in response and no sign that any troops had left their barracks.

On Saturday before the government order, Pakistan's army chief called on the civilian government to end the protest while "avoiding violence from both sides", the military press wing said.

The ruling party of former Prime Minister Nawaz Sharif - who was disqualified by the Supreme Court in July and is facing a corruption trial - has a fraught history with the military, which in 1999 launched a coup to oust Sharif from an earlier term.

Promoted
Listen to the latest songs, only on JioSaavn.com
Minister of Interior Iqbal on Saturday said the protests were part of a conspiracy to weaken the government, which is now run by Sharif's allies under a new prime minister, Shahid Khaqan Abbasi.
"There are attempts to create a chaos in (the) country," Iqbal said on state-run Pakistan TV.
© Thomson Reuters 2017