Day After Pak Anti-Terror Boast At UN, Minister Sits Next To Hafiz Saeed

The image showed Noor-Ul-Haq Qadri, the Minister for Religious Affairs and Interfaith Harmony in the Pakistan government, addressing an All Parties Conference organised by the Difa-e-Pakistan Council. 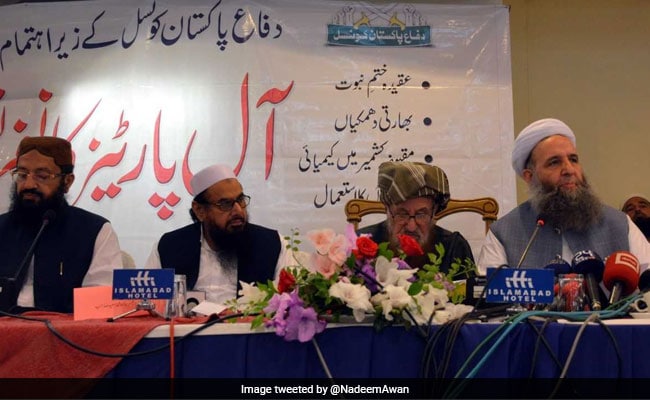 Hafiz Saeed and Noor-Ul-Haq Qadri were seen together at an event in Islamabad.

A minister in Pakistani Prime Minister Imran Khan's cabinet was photographed at an event with 26/11 mastermind Hafiz Saeed in Islamabad on Sunday, a day after Pakistan assured the United Nations General Assembly that it was doing all it can to act against terrorism.

The image showed Noor-Ul-Haq Qadri, the Minister for Religious Affairs and Interfaith Harmony in the Pakistan government, seated near Hafiz Saeed as he addressed an All Parties Conference organised by the Difa-e-Pakistan Council. Significantly, a banner in the background indicated that the conference was in "defence of Pakistan", and mentioned "Kashmir" as well as "threats from India".

The Difa-e-Pakistan Council is a coalition of over 40 Pakistani political and religious parties that advocate conservative policies. Mr Qadri's presence at the event with Hafiz Saeed vindicated India's stand after it ripped into Pakistan at the UN meet, calling it the host and patron of terror.

External Affairs Minister Sushma Swaraj specifically named Hafiz Saeed in her address at the United Nations meet in New York, asserting that it was not possible to hold negotiations with a country that allows a terrorist to roam free. Accusing Pakistan of "masking malevolence with duplicity", she said: "We have not sabotaged negotiations with Pakistan. We began talks with them because we believed it necessary. They were stalled only because of Pakistan's own behaviour."

Hafiz Saeed, co-founder of the Lashkar-e-Taiba and chief of the Jamaat-ud-Dawah, is the key accused in the 2008 Mumbai attacks, the 2006 Mumbai train bombings and the 2001 Parliament attack. Although the Pakistan government had taken over 184 establishments affiliated to him under global pressure in 2017, it was forced to let them reopen after the country's top court issued a verdict in this regard last month.

The US has named Hafiz Saeed as a specially-designated global terrorist, and announced a reward of $10 million to anybody who provides information that will help bring him to justice.