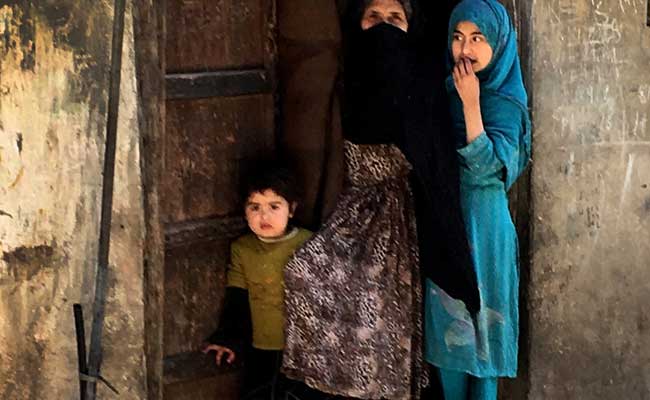 A family peers worriedly in a Pashtun neighborhood, Pakistan.

When the army and police trucks prowl through affluent areas in this sprawling garrison city, headlights flashing and riflemen at the ready, residents breathe a sigh of relief.

But when the trucks enter certain shabbier neighborhoods, home to a mix of Afghan refugees, migrants and ethnic Afghan Pashtuns, children scatter and adults wonder who may be taken away next.

Since the Pakistani security forces launched a nationwide anti-terrorist operation in February after a spate of suicide bombings, Pashtun leaders have complained vociferously that their communities are being targeted for harassment and racial profiling, especially here in Punjab Province.

Traditionally based in the northwest region bordering Afghanistan, Pashtuns who migrate or flee south to the Punjabi heartland have often been viewed as suspect outsiders, disdained by some as backward tribal people or war refugees with a penchant for crime and violence.

Now they have been further tarred by the Afghan and Pashtun origins of the militants who claimed most of the recent bombings, which took more than 125 lives; one blast ripped through a crowded public square in Lahore, the Punjab capital.

"The authorities think every Pashto speaker is a refugee or a terrorist. We are being targeted, but we, too, suffer from these blasts," said Anwar Khan, 40, a fruit seller in an open-air market who migrated from the northwest a decade ago. He pulled up his trouser cuff to reveal a row of metal pins in his leg, the result of a 2014 bombing in the market that killed 23 people. "May God destroy those who do this," he said.

After the recent bombings, police swept through many Pashtun communities in Punjab and elsewhere, combing markets and going house to house. Nationwide, more than 100 people were killed and hundreds detained as terrorism suspects. Many were said to be Afghans, including a man whom officials described as the "Afghan handler" of the Lahore attacker.

Meanwhile, the army shelled suspected militant camps on both sides of the border, a rugged region inhabited by Pashtun tribes that has long served as a shelter and staging ground for Islamist militias fighting both the Afghan and Pakistani governments.

Last week, after the military operation got underway, Pashtun leaders began receiving numerous complaints of harassment, especially in Punjabi cities such as Rawalpindi that are full of migrants and people displaced by fighting in the northwest. Residents said security forces were rounding up and detaining Pashto-speaking men for no reason.

"They were really angry after these blasts. They took away my grandfather and said he didn't have his identification, but we have been here for many years," said Jamal Khan, 16, who lives in a warren of alleys known as Army Village. "The elders had to rush over and get him out of the police station."

Like other Pashtun neighborhoods near the city's vast fruit and vegetable market, the narrow streets of Army Village were swarming with children and lined with sidewalk stands. The street signs were in Urdu, the dominant language of Pakistan, but the conversations were all in Pashto.

Many old men had lengthy beards and wore turbans; the few women on the streets were covered with billowing, mocha-colored burqas. Some residents complained that troops had entered and searched their homes, an affront to conservative Pashtun tradition in which women are kept secluded.

Other complaints came from the open-air markets and bazaars where many Pashtun migrants work. In one market, a circular appeared urging people to report anyone who wore Pashtun dress, spoke Pashto or sold items such as dried fruit. A photo of the notice flooded the Internet, and Punjab police officials finally tweeted that it was inappropriate and did not "reflect police policy."

As reports continued to pour in, Pashtun legislators and other leaders spoke up forcefully. On Monday, the northwest Khyber Pakhtunkhwa provincial assembly unanimously passed a resolution condemning the "racial profiling" of Pashtuns on the pretext of fighting terrorism. Social media was flooded with even more vituperative criticisms.

"Hundreds of Pashtuns are being arrested and harassed in the name of terrorism," said Sayed Zaffer Shah, a northwest legislator. "We never said all Punjabis are terrorists, though Punjabi Taliban were involved in bombings. This discrimination will only spread hatred."

Some critics even raised the specter of federal disintegration along ethnic lines, a highly sensitive subject in Pakistan. The country was violently dismembered in 1971 after the marginalized Bengali group seceded and the country of Bangladesh was created.

Protests came from non-Pashtun groups, as well. At a protest rally in the northwest city of Peshawar on Sunday, Mushtaq Ahmad of the Islamist Jamaat-e-Islami party declared angrily that "Pashtuns don't need any patriotic certificate from the Punjab and Sindh governments. Such hate campaigns must stop."

In Army Village and other targeted communities, though, some people said that the raids were almost routine in areas where many people are refugees or have no government identification cards. They also suggested that the new crackdown was mostly aimed at soliciting bribes.

"This has been going on for a long time; it only accelerated after the latest blasts," said a fruit market worker named Atiqullah, 21. His parents were Afghan war refugees; he was born in Pakistan but has no ID card. "Whenever something happens, they pick me up. This time they asked me if I was making bombs, but they were not serious," he said. "After two days I gave them $20, and here I am."