Pakistan starts work on Iranian gas line opposed by US 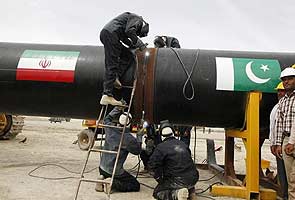 Dubai: The presidents of Iran and Pakistan marked the start of Pakistani construction on a much-delayed gas pipeline on Monday, Iranian media reported, despite US pressure on Islamabad to back out of the project.

Dubbed the "peace pipeline", the $7 billion project has faced repeated delays since it was conceived in the 1990s to connect Iran's giant South Pars gas field to India via Pakistan.

The United States has steadfastly opposed Pakistani and Indian involvement, saying the project could violate sanctions imposed on Iran over nuclear activities that Washington says are aimed at developing a weapons capability. Iran denies this.

India quit the project in 2009, citing costs and security issues, a year after it signed a nuclear deal with Washington.

Alluding to the United States, Ahmadinejad accused "foreign elements" of seeking to undermine Iran's relations with Pakistan and to thwart the Islamic Republic's progress by using its nuclear programme as a pretext.

"I want to tell those individuals that the gas pipeline has no connection whatsoever with the nuclear case," Ahmadinejad said in a translated address broadcast live on state television that followed the ground-breaking ceremony.

"With natural gas you cannot make atomic bombs. That's why they should have no excuse to oppose this pipeline."

The US State Department repeated US concerns about the project, saying if completed it could bring on US sanctions but also questioning whether it will ultimately be built.

Asked if she wished to calm those worries, US State Department spokeswoman Victoria Nuland bluntly told reporters in Washington: "I would not like to allay those fears."

"If this project actually goes forward we have serious concerns that sanctions would be triggered," she added. "All of that said, we've heard this pipeline announced about 10 or 15 times before ... so we'll have to see what actually happens."

Pakistan has pursued the pipeline scheme as a way of alleviating severe energy shortages that have sparked demonstrations and battered a weak government. At the same time, it badly needs the billions of dollars it receives in US aid.

"The Pakistani government wants to show it is willing to take foreign policy decisions that defy the US, particularly when such crucial issues as energy security are at stake," said Anthony Skinner, a director of British-based Maplecroft risks consultancy.

"The pipeline not only caters to Pakistan's energy needs, but also lodges brownie points with the many critics of the US amongst the electorate," he told Reuters.

Iran has completed 900 km (560 miles) of pipeline on its side of the border and Iranian contractors will also construct the pipeline in Pakistan, Iran's national broadcasting network IRIB reported.

Tehran has agreed to lend Islamabad $500 million, or a third of the estimated $1.5 billion cost of the 750-km (470-mile) Pakistani section of the pipeline, Fars news agency reported.

The two sides hope the pipeline will be complete in time to start delivery of 21.5 million cubic metres (760,000 million cubic feet) of gas per day to Pakistan by December 2014.

Promoted
Listen to the latest songs, only on JioSaavn.com
The project faces security challenges posed by ethnic Baluch militants who have demanded greater control over Baluchistan's natural resources, and by Iranian Sunni insurgents also based in Pakistan who are fighting for greater rights in Iran.

"Having a pipeline running through the region makes it particularly vulnerable to bombings and disruption," said Skinner. "Washington could bolster its support for local elements, causing significant disruption to pipeline infrastructure."
© Thomson Reuters 2013