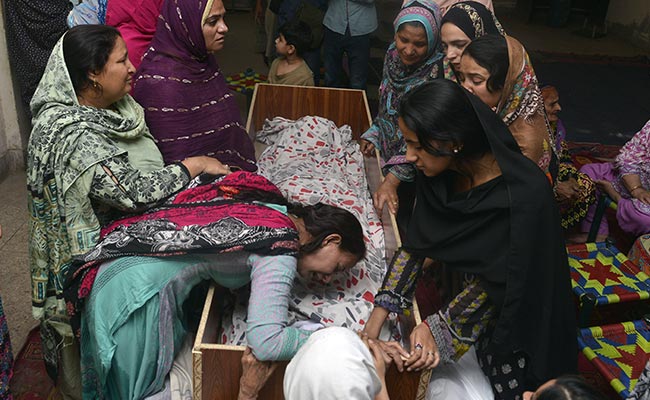 Relatives mourn over the body of a victim during a funeral following an overnight suicide bombing in Lahore on March 28, 2016. (AFP photo)

Lahore: Pakistan has detained more than 200 people since the Easter Sunday park bombing which killed 73 people including many children, officials said Tuesday, as the militants behind the attack taunted the prime minister.

The raids across the eastern province of Punjab were announced as parks reopened under tight security in the teeming provincial capital Lahore.

But Gulshan-i-Iqbal, where explosives packed with ball bearings ripped through crowds near a children's play area, remained closed.

Hundreds were injured in the suicide bombing claimed by the Jamaat-ul-Ahrar faction of the Pakistani Taliban, whose official name is the Tehreek-i-Taliban Pakistan (TTP).

A spokesman for the group said it had targeted Christians, a minority community in overwhelmingly Muslim Pakistan.

"More than 5,000 people were searched and interrogated and most of them were allowed to go, but some 216 have been apprehended for further investigations," Punjab provincial law minister Rana Sanaullah told reporters Tuesday.

More were being undertaken in all districts of the province "against sectarian militants and extremists", he said.

Security for hundreds of churches was increased.

Many of the victims were children and anguished families spent Easter Monday burying their dead.

On Tuesday the death toll climbed to 73 after a 16-year-old boy succumbed to his injuries, doctors said.

"The boy had lost his father and sister in the blast while his mother is being treated for critical injuries," Dr Tariq Mohsin told AFP.

Prime Minister Nawaz Sharif and his powerful military chief have both vowed to bring those behind the attack to justice.

"Terrorists cannot dent our resolve. Our struggle will continue until the complete elimination of the menace of terrorism," the premier said Monday after visiting victims in the provincial capital, a stronghold of his ruling Pakistan Muslim League.

But on Tuesday Ehansullah Ehsan, spokesman for the Jamaat-ul-Ahrar faction, derided the prime minister on Twitter.

"After the Lahore attack, Nawaz Sharif repeated old words to give himself false assurances," he wrote.

"Nawaz Sharif should know that war has reached his doorstep, and God willing the mujahideen will be the winners in this war."

Kashir Nawab, a 32-year-old Christian from the Youhanabad district of Lahore, said a "pall of gloom" hung over the area as mourners visited the homes of those lost in the blast.

Nawab said he was working to help arrange funeral services.

"Everybody is frightened and the Christians particularly feel unprotected," he said.

The attack was the worst so far this year in a country grimly accustomed to atrocities, and will further fray inter-religious ties.

Christians make up an estimated 1.6 percent of Pakistan's 200 million people and have long faced discrimination.

The country is still scarred by a Taliban assault on a Peshawar school in 2014 that killed 150 people, mostly children.

A military operation targeting insurgents was stepped up in response. Last year the death toll from militant attacks was the lowest since the TTP umbrella grouping was formed in 2007.

But analysts have warned the group is still able to carry out major attacks.