Pak-American Bullied For "Disgusting Curry" Wrote Poetry To Helps Others

In elementary school, classmates in Northern Virginia needled Duaah Hammad for the "disgusting" curry and roti her Pakistani mother packed for lunch. 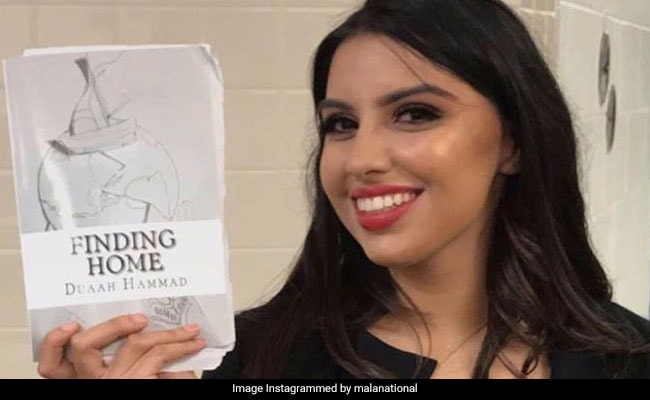 Duaah Hammad's "Finding Home" book of poetry maps her search for "a place to call home."

In elementary school, classmates in Northern Virginia needled her for the "disgusting" curry and roti her Pakistani mother packed for lunch.

In first grade, they said the henna designs that enveloped her hands and wrists looked crude.

In middle school, the bullying and taunts of "terrorist" crescendoed.

Until she was 14, Duaah Hammad resented her parents' strictness, their traditional values. She pulled away from her family's heritage and religion, believing it would stem the bullying and make her more American.

"Growing up, I felt like I needed to be American. I felt like being Muslim or Pakistani wasn't good enough," Hammad said. "I felt that really heavily in school and that literally made me hate being Pakistani."

She grappled with the dichotomy in "Finding Home," a self-published book of poetry, which is relayed in four sections and maps her search for "a place to call home."

By the time she reached her senior year at Freedom High School in Loudoun County, Virginia, last year, the bitterness she harbored toward her upbringing as a first-generation immigrant had receded - aided by more tolerant peers and a clearer-eyed sense of self.

She had made peace with the bullying that punctuated her younger years and come to proudly and comfortably straddle the in-between of being Pakistani-American. But as she witnessed racist invective and exclusionary ideas rise to prominence in the Trump era and as she considered her 10-year-old brother's future, a question nagged: What about the next generation?

For them, she wrote. She said she hopes her dispatch will provide comfort to children navigating their own uncertainties, a guidepost for those made to feel disempowered or alienated.

Inspired by Rupi Kaur, the best-selling Canadian poet whose Instagram-friendly work has generated a legion of young followers and disdain from others, Hammad began the book as her senior capstone project at Freedom.

At the time, she wanted an outlet to condemn President Donald Trump's administration. Her parents, fearing for her safety, had counseled against attending protests. Instead, she took her principal's suggestion and wrote about her experiences.

The 20-year-old's adolescence unfurls in vivid verse across 99 pages, tapping into issues of gender expectations, ostracism and self-acceptance.

She reflected on a teenage visit to Pakistan - her first trip to the country after immigrating to the United States as a toddler - and how it helped her reconnect to her roots.

Before she left for the trip, friends joked that she would be killed or married off. Another reason to be teased, Hammad remembered thinking. But her classmates didn't know about the snow-capped mountains in Peshawar, the "beaches with the never-ending shores" in Karachi and the city bustle of Lahore.

She examined her parents' sacrifice, writing how they built "a palace from a few cushions" and managed to provide a nurturing home even when the family lived in a small, two-room apartment when they first arrived in the United States. She traced how her resentment toward their traditional mores evolved into appreciation and understanding over time.

"The more I pulled from cultural things, the more it scared them," Hammad said, reflecting on her childhood from her family's living room, which is furnished with handmade wares imported from Pakistan.

Hammad grappled with prejudice, the sense that regardless of how hard she and other Muslims work to "prove that we're good," some will still define them by the actions of a few.

Shefa Ahsan, Hammad's friend, related to a passage in the bookabout the nerves that rise each time a terrorist attack occurs.

You swallow the lava burning in your throat

And begin to mumble back and forth

Please don't let it be a Muslim

Ahsan, whose parents are from India, is familiar with the burden and expectation of serving as a standard-bearer for the 1.8 billion people who follow Islam.

But the poems also resonated with Ahsan because they speak to the more universal American experience of growing up an immigrant, or as the children of immigrants, and traversing cultures.

"Her story was also everyone else's story," she said.

(Except for the headline, this story has not been edited by NDTV staff and is published from a syndicated feed.)
Comments
Northern Virginiabullying