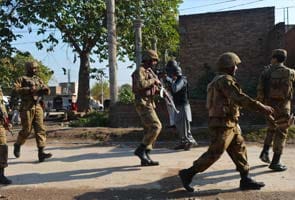 Islamabad: Against the backdrop of a spike in tensions with India, the Pakistani military is conducting a combat exercise involving fighter jets and ground troops with a top General saying the armed forces were "well prepared" to defend the country's sovereignty and integrity.

The Pakistan Air Force is conducting the 'Saffron Bandit' exercise with elements from the Army Aviation and Army Air Defence.

"The prevailing complex global geo-political environment and regional threat situation are not only unique but also more challenging, since we face both internal and external threats," Wynne was quoted as saying in an official statement.

The exercise is being conducted against the backdrop of heightened tensions between India and Pakistan following a string of ceasefire violations along the Line of Control in Jammu and Kashmir.
The Saffron Bandit exercise is held every three years.

Promoted
Listen to the latest songs, only on JioSaavn.com
Gen Wynne flew in an airborne early warning and control aircraft yesterday to observe the "employment of integrated air and ground combat elements" while army chief Gen Ashfaq Parvez Kayani too visited the exercise areas.
Wynne said the exercise would help enhance Pakistan's "preparedness in the hi-tech scenario of aerial warfare."