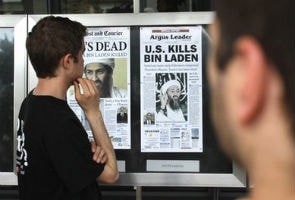 Islamabad: The Pakistan government on Tuesday formed a commission to probe the killing of Al Qaeda leader Osama bin Laden in a covert US raid in the garrison city of Abbottabad and to determine the nature and causes of lapses associated with the incident.

The commission will also "determine the nature, background and causes of lapses of the concerned authorities, if any" and make "consequential recommendations".

The Cabinet Secretary will work as the secretary of the commission.

A resolution adopted by a joint session of both houses of parliament, which had been convened on May 13 to discuss the US raid against bin Laden, had demanded that the government should appoint "an independent commission on the Abbottabad operation, fix responsibility and recommend necessary measures to ensure that such an incident does not recur".

The military, particularly the Inter-Services Intelligence, had come in for strong criticism from politicians and the media for its failure to detect bin Laden's presence in Abbottabad, where the Al Qaeda leader was living hundreds of metres away from the elite Pakistan Military Academy.

In a daring pre-dawn raid, a US Navy SEAL team swooped on bin Laden's compound and killed him on May 2.

Promoted
Listen to the latest songs, only on JioSaavn.com
The Pakistani army and air force are conducting separate probes to ascertain how bin Laden had lived undetected in Abbottabad for several years and how US helicopters that participated in the raid were able to evade radars.