Over 200,000 in Germany protest nuclear power 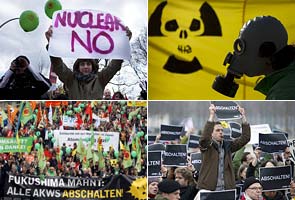 Berlin: Tens of thousands of people on Saturday turned out in Germany's largest cities to protest the use of nuclear power in the wake of Japan's Fukushima reactor disaster, police and organizers said.

Organizers said some 250,000 people marched at the "Fukushima Warns: Pull the Plug on all Nuclear Power Plants" rallies in the country's four largest cities, making them the biggest anti-nuclear protest in the country's history.

"We can no longer afford bearing the risk of a nuclear catastrophe," Germany's environmental lobby group BUND said.

The disaster at Japan's Fukushima Dai-ichi nuclear facility triggered Chancellor Angela Merkel's conservative government last week to order a temporary shutdown of seven of the country's older reactors pending thorough safety investigations. Officials have since hinted several of them might never go back into service.

Protesters shouted "Fukushima, Chernobyl: Too much is too much!" or "Switch them off," urging the government to shut down the country's 17 reactors for good. They also held a minute of silence to remember the victims of Japan's March 11 earthquake and tsunami.

In the northern port city of Hamburg some 40,000 turned out and more than 30,000 were on the streets in southern Munich, police said. Cologne police did not provide a figure and referred to the organizer's estimate of 40,000 protesters.

Nuclear power has been very unpopular in Germany ever since radioactivity from the 1986 Chernobyl disaster drifted across the country.

A centre-left government a decade ago penned a plan to abandon the technology for good by 2021, but Merkel's government last year amended it to extend the plants' lifetime by an average of 12 years. In a complete U-turn, the government has now put that plan on hold.

Promoted
Listen to the latest songs, only on JioSaavn.com
The cascade of failures at Japan's Fukushima plant has reignited the political debate on the use of nuclear power in Germany, Europe's biggest economy, and many opposition lawmakers have called to shut down all reactors even before 2020.