Over 150 Injured After Two Trains Collide In Spain 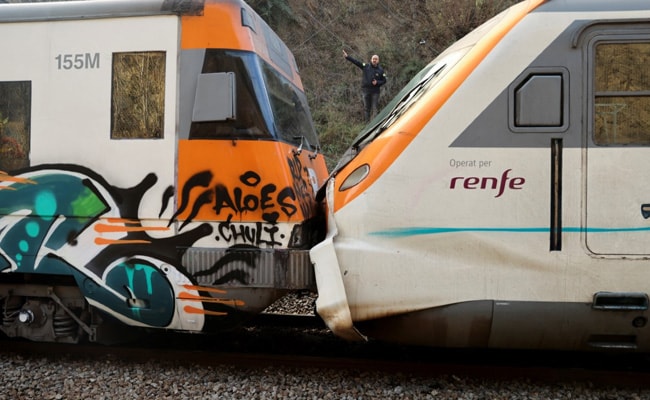 A total of 155 people sustained minor injuries, of which 39 were taken for further examination

More than 150 people were lightly injured Wednesday when one train ran into the back of another at a station near Barcelona, authorities and Spain's Renfe rail operator said.

The SEM regional emergency services said the train had been moving very slowly when the collision occurred just before 8:00 am (0700 GMT), with most people suffering bumps and bruises.

A total of 155 people sustained minor injuries, of which 39 were taken for further examination at local health centres or hospitals, the SEM said on Twitter.

"There was a collision between two trains at 7:50 am at the Montcada i Reixac-Manresa station, on the line heading into Barcelona, that's to say one train ran into the back of another," a spokesman for the state rail operator told AFP.

The train was moving "very slowly (when the collision occurred) but people who were standing up fell over and hurt themselves," Joan Carles Gomez, an emergency services official told reporters at the scene.

"We have examined 155 people who were affected... none are seriously injured," he said.

"We're talking about many bruises and some head injuries, but nothing serious."

Gomez initially said 14 people had been taken for further treatment to rule out "any fractures", with the SEM later updating that figure to 39 in a posting on Twitter.

Transport Minister Raquel Sanchez said an investigation had been opened into the cause of the crash, saying the incoming train was already braking when the collision occurred.

"Fortunately, despite the seriousness of the accident, there were no serious injuries," she told reporters at the station.

"Our trains work well although sometimes accidents or collisions like this cannot be avoided. If, after the investigation, it turns out that steps need to be taken to guarantee the functioning of our trains, we will absolutely do so."

Rail traffic along the line was briefly suspended in both directions and Renfe had opened an investigation into what happened.