Oval Office Talks And Ice-Cream: Joe Biden Tries It All To Save Agenda

All week the Democrat's official daily agenda, sent out each evening by the White House, has been startlingly empty. 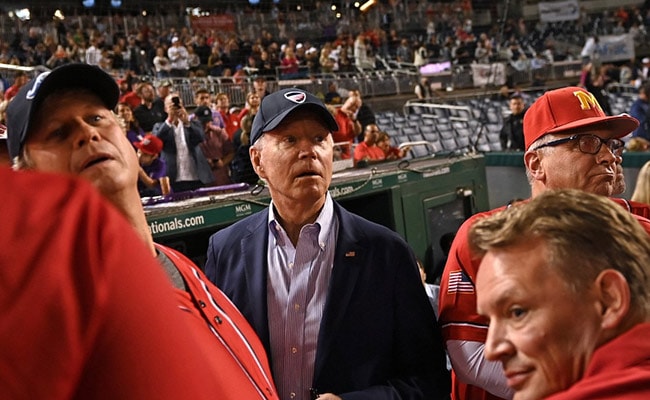 He's tried everything from Oval Office sitdowns to delivering ice cream, but nothing so far has been enough for Joe Biden to get his Democratic party in line -- or save his presidency from the threat of dramatic failure.

At 78, Mr Biden is one of the most experienced politicians to live in the White House. Before defeating Donald Trump he'd had 36 years as a senator and eight years as Barack Obama's vice president.

Now he's having to rummage deep into that box of tricks to try and keep his administration's ambitions from dying in Congress.

All week the Democrat's official daily agenda, sent out each evening by the White House, has been startlingly empty. His one big event, a trip to Chicago on Wednesday, was cancelled.

Behind the scenes, though, Mr Biden has been scrambling, either huddling with Chief of Staff Ron Klain and other key aides, making calls to party members or meeting in person with Democratic leaders like Speaker Nancy Pelosi.

Among the most frequent travelers along Pennsylvania Avenue between Congress and the White House have been Democratic senators Joe Manchin and Kyrsten Sinema. The duo, dubbed "Manchema", are keys to unlocking Mr Biden's stuck multi-trillion-dollar spending programmes that he says would transform the country for the better.

The White House has also not ruled out Mr Biden himself going to Capitol Hill.

"We listen, we engage, we negotiate," Press Secretary Jen Psaki said, when asked what the largely out-of-sight president is doing.

"I would say that we have had about 260 -- probably more, probably more like 300, now -- engagements with a range of members and their offices over the course of just September."

And it's not all talking and listening. There's eating and playing too.

A week ago, there were what the White House described as "Covid-safe snacks" being dished out in the Oval Office on a day when the competing groups of Democratic lawmakers came in waves.

Late Wednesday, it was time to deploy the president's favorite food: ice cream.

Making a surprise appearance at the annual congressional baseball game, where Republicans and Democrats turn out for a charity sporting clash, Mr Biden personally distributed Dove bars in wrappers bearing the presidential seal.

The Democrats narrowly lost the baseball game, but Ms Psaki says Mr Biden has a deep feel for winning the bigger games in Congress.

"He knows from doing this a few times -- many, many times -- that, ultimately, it's not more complicated than needing enough votes to get legislation across the finish line."

Hanging in the balance

Will it be that simple?

There's little surprise in Republicans trying everything to doom Biden's spending plan. They're even refusing to cooperate on authorising a US national debt increase -- brinkmanship that could in theory push the United States into default.

The really difficult bit is that Mr Biden's thorniest problem lies inside his own party.

Basically, there are two hugely ambitious bills awaiting votes: one for around $1 trillion in infrastructure spending and another costing up to $3.5 trillion -- paid through tax hikes on corporations and the wealthiest few -- to fund things like education, childcare and climate change mitigation.

Mr Biden talks of this as a "historic" opportunity to repair a tattered nation physically and socially -- a chance to "level the playing field".

Republicans support the smaller bill while unanimously opposing the bigger social spending one.

That means on the larger version Mr Biden relies entirely on Democratic support and their razor-thin majority means they can't afford to lose a single vote in the Senate or more than a few in the House.

And there's the problem.

Mr Manchin and Ms Sinema are refusing -- so far -- to back the large bill, which means it can't get through the Senate. And left-wing House members are refusing to back the smaller bill unless they're sure the bigger one will pass too.

If Democrats can't unite, then both bills, Mr Biden's political credibility, and any hope of keeping Congress in Democratic hands at next year's midterm elections could go out the window.

"The fate of the entire Biden legislative agenda hangs in the balance," former Obama advisor Dan Pfieffer wrote in his newsletter Thursday.

"I don't say this lightly. The Dems are currently in #disarray."