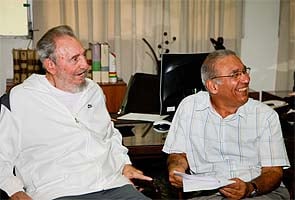 Havana (Cuba): Cuban leader Fidel Castro has said that Al-Qaida leader Osama bin Laden is a bought-and-paid-for CIA agent who always popped up when former US President George W Bush needed to scare the world, arguing that documents recently posted on the Internet prove it.

"Any time Bush would stir up fear and make a big speech, bin Laden would appear threatening people with a story about what he was going to do," Castro told state media during a meeting with a Lithuanian-born writer known for advancing conspiracy theories about world domination. "Bush never lacked for bin Laden's support. He was a subordinate."

Castro said documents posted on WikiLeaks.org - a website that recently released thousands of pages of classified documents from the Afghan war - "effectively proved he was a CIA agent." He did not elaborate.

Promoted
Listen to the latest songs, only on JioSaavn.com
The comments, published in the Communist Party daily Granma on Saturday, were the latest in a series of provocative statements by the 84-year-old revolutionary, who has emerged from seclusion to warn that the planet is on the brink of nuclear war.

Castro even predicted the global conflict would mean cancellation of the final rounds of the World Cup last month in South Africa. He later apologised for jumping the gun. Last week, he began highlighting the work of Daniel Estulin, who wrote a trilogy of books highlighting the Bilderberg Club, whose prominent members meet once a year behind closed doors.