Osama bin Laden dead, killed by US in Pak; buried at sea 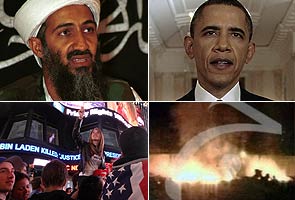 Washington: Osama bin Laden, the mastermind of the most devastating attack on American soil in modern times and the most hunted man in the world, was killed in a firefight with United States forces in Pakistan on Sunday, President Obama announced. (Watch: Obama announces Osama's death | Full Text)

In a dramatic late-night appearance in the East Room of the White House, Mr. Obama declared that "justice has been done" as he disclosed that American military and C.I.A. operatives had finally cornered bin Laden, the Al Qaeda leader who had eluded them for nearly a decade. American officials said bin Laden resisted and was shot in the head. He was later buried at sea.

The news touched off an extraordinary outpouring of emotion as crowds gathered outside the White House, in Times Square and at the Ground Zero site, waving American flags, cheering, shouting, laughing and chanting, "USA, USA!" In New York City, crowds sang the Star-Spangled Banner. Throughout downtown Washington, drivers honked horns deep into the night.

"For over two decades, bin Laden has been Al Qaeda's leader and symbol," the president said in a statement televised around the world. "The death of bin Laden marks the most significant achievement to date in our nation's effort to defeat Al Qaeda. But his death does not mark the end of our effort. There's no doubt that Al Qaeda will continue to pursue attacks against us. We must and we will remain vigilant at home and abroad." (Watch: The raid that located, killed Osama)

Bin Laden's demise is a defining moment in the American-led war on terrorism, a symbolic stroke affirming the relentlessness of the pursuit of those who attacked New York and Washington on Sept. 11, 2001. What remains to be seen, however, is whether it galvanizes his followers by turning him into a martyr or serves as a turning of the page in the war in Afghanistan and gives further impetus to Mr. Obama to bring American troops home. How much his death will affect Al Qaeda itself remains unclear. For years, as they failed to find him, American leaders have said he was more symbolically important than operationally significant because he was on the run and hindered in any meaningful leadership role. And yet, he remained the most potent face of terrorism around the world and some of those who downplayed his role in recent years nonetheless celebrated his death. (Read: US embassies on high alert)

Given Bin Laden's status among radicals, the American government braced for possible retaliation. A senior Pentagon official said late Sunday that military bases in the United States and around the world were ordered to a higher state of readiness. The State Department issued a worldwide travel warning, urging Americans in volatile areas "to limit their travel outside of their homes and hotels and avoid mass gatherings and demonstrations."

The strike could exacerbate deep tensions with Pakistan, which has periodically bristled at American efforts even as Bin Laden evidently found safe refuge on its territory for nearly a decade. Since taking office, Mr. Obama has ordered significantly more unmanned drone strikes on suspected terrorist targets in Pakistan, stirring public anger and prompting the Pakistani government to protest. (Read: Pak distances itself from Osama raid, killing)

When the end came for bin Laden, he was found not in the remote tribal areas along the Pakistani-Afghan border where he has long been presumed to be sheltered, but in a massive compound about an hour's drive north from the Pakistani capital of Islamabad. He was hiding in the medium-sized city of Abbottabad, home to a large Pakistani military base and a military academy of the Pakistani army. (Read: Osama was 800 yards from Pakistan Military Academy)

The house at the end of a narrow dirt road was roughly eight times larger than other homes in the area, but had no telephone or television connections. When American operatives converged on the house on Sunday, bin Laden "resisted the assault force" and was killed in the middle of an intense gun battle, a senior administration official said, but details were still sketchy early Monday morning. (Read: Osama bin Laden - World's most-wanted man)

The fate of Ayman al-Zawahiri, the Al Qaeda second-in-command, was unclear Sunday night.

The official said that military and intelligence officials first learned last summer that a "high-value target" was being protected in the compound and began working on a plan for going in to get him. Beginning in March, Mr. Obama presided over five national security meetings at the White House to go over plans for the operation and on Friday morning, just before leaving Washington to tour tornado damage in Alabama, gave the final order for special forces and C.I.A. operatives to strike.

Mr. Obama called it a "targeted operation," and added: "No Americans were harmed. They took care to avoid civilian casualties. After a firefight, they killed Osama bin Laden and took custody of his body."

"This is important news for us, and for the world," said Gordon Felt, president of the group Families of Flight 93. "It cannot ease our pain, or bring back our loved ones. It does bring a measure of comfort that the mastermind of the September 11th tragedy and the face of global terror can no longer spread his evil."

The mostly young people who celebrated in the streets of New York and Washington saw it as a historic moment, one that for many of them culminated a worldwide manhunt that started when they were children.

Some climbed trees and lampposts directly in front of the White House to cheer and wave flags. Cigars and noisemakers were common. One group started singing, "Osama, Osama, hey, hey, hey, good bye."

Maureen Hasson, 22, a recent college graduate working for the Justice Department, came down to Lafayette Square in a fushia party dress and flip-flops. "This is full circle for our generation," she said. "Just look around at the average age here. We were all in middle school when the terrorists struck. We all vividly remember 9/11 and this is the close of that chapter."

Sam Sherman, 18, a freshman at George Washington University originally from New York, also rushed down to the White House. "The feeling you can't even imagine, the feeling in the air. "It's crazy," he said. "I have friends with parents dead because of Osama bin Laden's plan, okay? So when I heard this news, I was coming down to celebrate."

Mr. Obama said Pakistan had helped develop the intelligence that led to Bin Laden, but an American official said Islamabad was not informed about the strike in advance. "We shared our intelligence on this compound with no other country, including Pakistan," the official said.

Mr. Obama recalled his statements in the 2008 presidential campaign when he vowed to order American forces to strike inside Pakistan if necessary even without Islamabad's permission. "That is what we've done," he said. "But it's important to note that our counterterrorism cooperation with Pakistan helped lead us to bin Laden and the compound where he was hiding."

Relations with Pakistan had fallen in recent weeks to their lowest point in years. Adm. Mike Mullen, the chairman of the Joint Chiefs of Staff, publicly criticized the Pakistani military two weeks ago for failing to act against extremists allied to Al Qaeda who shelter in the tribal areas of North Waziristan. Last week, Gen. Ashfaq Pervez Kayani, head of the Pakistani army, said Pakistan had broken the back of terrorism on its territory, prompting skepticism in Washington.

Mr. Obama called President Asif Ali Zardari of Pakistan to tell him about the strike after it was underway and his advisers called their Pakistani counterparts. "They agree that this is a good and historic day for both of our nations," Mr. Obama said.

The city of Abbottabad where Bin Laden was found has had other known Al Qaeda presence in the past. A senior Indonesian militant, Umar Patek, was arrested there earlier this year. Mr. Patek was protected by a Qaeda operative, a postal clerk who worked under cover at the main post office, a signal that Al Qaeda may have had other operations in the area.

As the operation's start approached, many American officials posted at the United States consulate in Peshawar, the capital of the north west area of Pakistan, were told suddenly to depart last Friday, leaving behind only a core group of essential staff. The American officials said they had been told to leave because of fears of kidnapping but were not tipped off to the operation.

Analysts said Bin Laden's death amounted to a double blow for Al Qaeda, after its sermons of anti-Western violence seemed to be rendered irrelevant by the wave of political upheaval rolling through the Arab world.

"It comes at a time when Al Qaeda's narrative is already very much in doubt in the Arab world," said Martin S. Indyk, vice president and director of foreign policy at the Brookings Institution. "Its narrative was that violence was the way to redeem Arab honor and dignity. But Osama bin Laden and his violence didn't succeed in unseating anybody."

Al Qaeda sympathizers reacted with disbelief, anger and in some cases talk of retribution. On a web site considered an outlet for Al Qaeda messages, forum administrators deleted posts by users announcing Bin Laden's death and demanded that members wait until the news was confirmed by Al Qaeda sources, according to the SITE Intelligence Group, an organization that monitors radicals.

Even so, SITE said, sympathizers on the forum posted messages calling Bin Laden a martyr and suggesting retaliation. "America will reap the same if the news is true and false," said one message. "The lions will remain lions and will continue moving in the footsteps of Usama," said another, using an alternate spelling of Bin Laden's name.

In the United States, the Council on American-Islamic Relations, an advocacy organization, said it welcomed Bin Laden's death. "As we have stated repeatedly since the 9/11 terror attacks, Bin Laden never represented Muslims or Islam," the group said in a statement. "In fact, in addition to the killing of thousands of Americans, he and Al Qaeda caused the deaths of countless Muslims worldwide."

"This momentous achievement marks a victory for America, for people who seek peace around the world, and for all those who lost loved ones on September 11, 2001," former President George W. Bush, who launched the war against Al Qaeda after Sept. 11 and called for Bin Laden to be caught "dead or alive," said in a statement. "The fight against terror goes on, but tonight America has sent an unmistakable message: No matter how long it takes, justice will be done."

Promoted
Listen to the latest songs, only on JioSaavn.com
Mr. Obama used similar language and warned that the war against terrorists has not ended. "We will be relentless in defense of our citizens and our friends and allies. We will be true to the values that make us who we are. And on nights like this one, we can say to those families who have lost loved ones to Al Qaeda's terror, justice has been done."

The president was careful to add that, as Mr. Bush did during his presidency, the United States is not at war with Islam. "Bin Laden was not a Muslim leader; he was a mass murderer of Muslims," Mr. Obama said. "Indeed, Al Qaeda has slaughtered scores of Muslims in many countries, including our own. So his demise should be welcomed by all who believe in peace and human dignity."
Comments
Bin Laden deadOsama bin LadenOsama deadOsama killed