Joe Biden also paid tribute to the late retired four-star general Colin Powell, a former chairman of the Joint Chiefs of Staff and secretary of state who died last month of complications from Covid-19, after a battle with cancer. 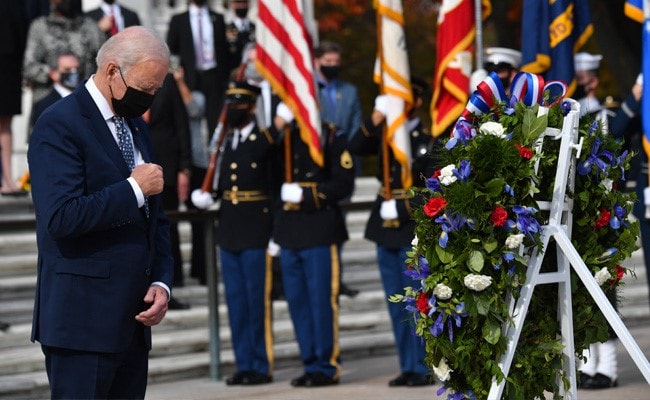 "Our veterans represent the best of America," Joe Biden said at the ceremony.

President Joe Biden on Thursday saluted the nation's troops as the "very spine of America" at a Veterans Day ceremony in Arlington National Cemetery -- the first since the end of military operations in Afghanistan.

Biden also paid tribute to the late retired four-star general Colin Powell, a former chairman of the Joint Chiefs of Staff and secretary of state who died last month of complications from Covid-19, after a battle with cancer.

"Our veterans represent the best of America," Biden said at the ceremony, which also marked the 100th anniversary of the hallowed Tomb of the Unknown Soldier.

"You are the very spine of America, not just the backbone. You're the spine of this country. And all of us -- all of us -- owe you."

Biden, who has come under fire from US veterans of the war in Afghanistan for the chaotic US withdrawal from the country in late August, said that military members and their families had seen their lives "shaped by the conflicts in Iraq and Afghanistan."

"Since 9/11, hundreds of thousands of Americans have served. So many are still serving today in harm's way, and we cannot forget them," he said, alluding to US soldiers still deployed in Iraq and eastern Syria to fight the jihadist Islamic State group.

Biden, whose son Beau served in Iraq before he succumbed to brain cancer, emphasized that "so many veterans and their families and caregivers have been through hell."

He laid a wreath on the Tomb of the Unknown Soldier where, in recent days, the public was allowed for the first time in a century to leave flowers.

Normally, the public is kept at a distance from the monument, but thousands came to pay their respects and leave tokens of gratitude this week.

To mark the centenary of the Tomb of the Unknown Soldier, which in 1921 first housed the remains of a US soldier who died on a French battlefield during World War I, troops dressed in period uniforms paraded through the cemetery.

Since that initial burial, two other unknown soldiers have been laid to rest in the tomb: one killed in World War II and one killed in the Korean war.

A fourth soldier killed in Vietnam was also buried there, but his remains were later identified and buried in Missouri, in accordance with his family's wishes.