On Senate Floor With Gun On Hip, Republican Says She Will Deter Violence

Sen. Amanda Chase decided to openly carry her gun after a colleague said he was mobbed by activists. 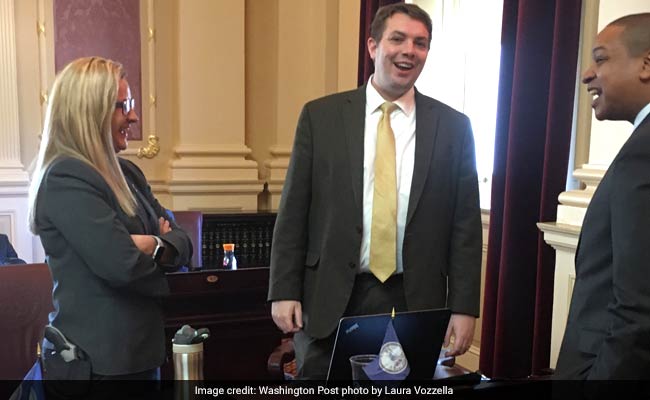 Virginia Sen. Amanda Chase wears her handgun on the floor of the Senate in Richmond on Wednesday.

Even in Virginia, where gun culture runs deep and some state lawmakers wear concealed weapons as routinely as dress socks, this scene raised eyebrows: State Sen. Amanda Chase standing on the floor of the ornate chamber with a .38 special openly strapped to her hip.

"I've had people get in my face. I've had people come up and try to touch me inappropriately," said Chase, a freshman seeking re-election this year in a suburban-rural district south of Richmond. "And it'' - the gun - "is a deterrent."

Rules about guns are notoriously loose in this Capitol, where even visitors with concealed-carry permits are allowed to bring them in. In the Senate alone, at least six of the 21 Republicans regularly bring guns onto the floor. But most of the time, the keep their weapons concealed. That was true for Chase until this week.

"I respect that it may raise and eyebrow with people, so I always conceal-carry," she said. "I don't want to raise an alarm for other people."

Chase had a change of heartafter a colleague complained about an encounter with immigration activists. Sen. Richard Black, R-Loudoun County, said the activists mobbed him Monday after he presented his bill to ban sanctuary cities. Chase decided that wearing her gun openly might deter that kind of thing.

"It concerned me," she said of the episode with Black. "I've had threats. I've had stalkers since I've been in the General Assembly. I am going to continue to represent the issues that are important to my constituents, and I'm not going to be intimidated by people who would try to physically harm me."

Chase also recalled an earlier scare: She was working in the Richmond office of then-U.S. Rep. Eric Cantor in 2010 when a shot was fired through the window.

"If she gets in an argument, what's she gonna (do), pull out a gun and shoot them?" he said. "I just think it's absurd."

Gun-toting legislators have run into a few problems over the years in the Capitol. Sen. John Cosgrove, R-Chesapeake, accidentally left a loaded gun in a committee room in 2017, the Times-Dispatch reported at the time.

In 2006, then-Del. Jack Reid, R-Henrico County, accidentally fired his pistol in his General Assembly office. A single bullet lodged into a bulletproof vest that was hanging on the back of his closed office door. No one was injured.