On Robert Mueller's Last Day On US Stage, A Halting, Faltering Appearance

Mueller's halting testimony on Wednesday before the House Judiciary and Intelligence committees examining what went wrong in the 2016 presidential election were at times painful to watch. 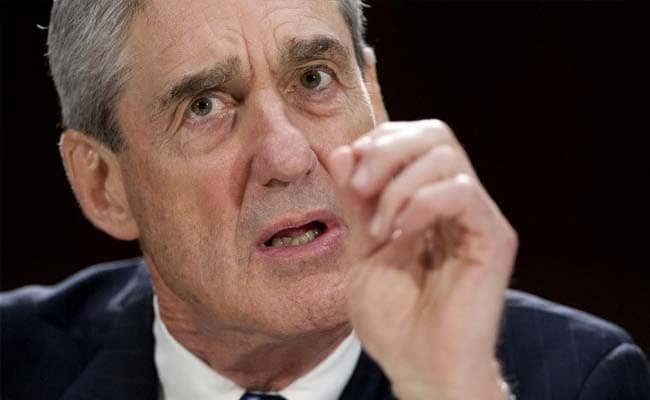 Mueller phased in and out of the precise, pointed style that had characterized his long legal career.

He could be quick, abrupt, precise - a familiar version of Robert Mueller III, the Marine and FBI director who had established himself in a lifetime of service as a paragon of Washington nonpartisanship. Again and again, he dispatched questions from Democrats and Republicans alike: "True." "Accurate." "Correct."

But in what was likely to have been his final act on Washington's center stage Wednesday, the special counsel who spent nearly two years investigating Russian interference in the 2016 presidential election also displayed an unfamiliar and troubling side, repeatedly asking for help finding quotations from his own report, over and over seeming to struggle to follow questions. He spoke softly, stumbling over his words, occasionally trailing off, as if he'd lost his train of thought.

Mueller's halting testimony on Wednesday before the House Judiciary and Intelligence committees examining what went wrong in the 2016 presidential election were at times painful to watch. Even though Mueller delivered strongly worded warnings that American elections remain vulnerable to attack by Russians and others, any expectation that his appearance would generate the impetus for an impeachment of President Donald Trump was quickly dashed.

The proceedings seemed to change few, if any, minds about Trump's connection to Russian interference. But the day definitively altered perceptions of Mueller, one of the nation's most honored public officials, a symbol of bipartisanship as FBI director in the harrowing months after the 9/11 terrorist attacks.

Mueller, 74, came to his role as special counsel early in 2017 as he had entered the jobs of FBI director, U.S. attorney in Boston and homicide prosecutor in Washington - as a widely respected exemplar of nonpartisan rectitude and straight-arrow service in an ever more divided nation.

He led the FBI through both Republican and Democratic administrations, leading the agency's shift in direction, from a focus on criminal threats to a global intelligence battle against terrorism.

Over the 22 months of his Russia investigation, Mueller remained publicly silent, speaking mainly through indictments that have led to convictions of the president's campaign chairman, deputy campaign manager, national security adviser and one of his personal attorneys.

The nation's hopes and dreads were attached to Mueller. On "Saturday Night Live," the cast sang "All I Want for Christmas Is You" to a portrait of the special counsel. Right-wing websites painted Mueller as organizer of an anti-Trump vendetta.

And in the days leading up to Wednesday's hearing, politicians and journalists created a breathless buildup of expectations. Some Democrats saw his appearance as their last best chance to demonstrate to the public just how damning the Mueller report really is.

"We want Robert Mueller to bring it to life," House Intelligence Committee chairman Adam Schiff, D-Calif., said before the hearing.

"This may be the only chance he gets to explain what he meant," Fox News anchor Martha MacCallum told viewers shortly before Mueller's day in the hot seat began.

There was never any reason to expect that Mueller would use his appearance before Congress as an opportunity to deliver a personal view about what Trump did wrong and how his actions should be addressed.

"The work speaks for itself," Mueller had said in May, when his report as special counsel was released.

But Mueller's shaky demeanor, though steadier as the day wore on, drew focus away from what few conclusions he was willing to confirm or bat down.

Mueller phased in and out of the precise, pointed style that had characterized his long legal career. At times, especially in the afternoon session before the Intelligence Committee, he seemed his old self, anticipating questions, displaying sharp command of his investigation. He artfully avoided stating any opinions about Trump's actions, even as he vigorously defended the integrity of his investigative staff. Every hair was in place, his trademark white shirt was crisp, his grasp on the boundaries of his testimony seemed firm.

"All decisions were made based on the facts and the law," he said in an opening statement. "The report is my testimony. . . . We scrutinized every word."

But under questioning from House members, his voice grew thinner, less certain. He sometimes searched for words. His hesitations at times seemed intentional, like Jimmy Stewart in one of his aw-shucks roles as a character who strategically stumbles in the service of deflecting unwanted questions. At other points, Mueller's halting manner seemed involuntary.

He tripped on the president's name: "It would be Trimp, uh, Trump," he said at one point. He said he was "not familiar" with the name Fusion GPS, a company that played a central role in the origins of the investigation into Russian interference with the 2016 campaign. He said, after a long pause, that he'd been appointed U.S. attorney in Boston by President George H.W. Bush, when it had actually been President Ronald Reagan.

Mueller said in the morning that it was correct that the only reason he did not indict Trump was because a Justice Department legal opinion said a sitting president cannot be indicted; then, in the afternoon, Mueller corrected himself, saying that "we did not make any determination with regard to culpability."

As the day wore on, many in the audience of millions, watching online and on all the major TV networks, may have joined politicians from both parties in wondering whether Mueller was simply a reluctant witness or was for some reason struggling with the material.

"I hope that the American people remember him when he was in his prime, let me put it that way," said Sen. John Neely Kennedy, R-La.

"This is delicate to say, but Mueller . . . does not appear as sharp as he was" in past appearances before Congress, tweeted David Axelrod, a former adviser to President Barack Obama.

On TV and online, the verdict on Mueller's day on Capitol Hill was, for once, unanimous across ideological divisions: "frail" (NBC), "dazed and confused" (Drudge Report), "a disaster for the Democrats, and a disaster for the reputation of Robert Mueller" (Fox News). That last quote, from Fox anchor Chris Wallace, appealed to Trump, who quickly tweeted it out to his followers.

Late in the day, Trump declared victory, dismissing Mueller's appearance as "one of the worst performances in the history of our country."

But a person familiar with Mueller's investigation, who spoke on the condition of anonymity, defended the former special counsel, saying: "While some of his responses might have been more crisp and expansive, his performance has no bearing on the reliability and integrity of the investigation. . . . Mueller is a prosecutor's prosecutor, and prefers to speak through his actions in court or, in this case, the Mueller report."

The nation's first opportunity to hear at length from Mueller did not deliver the reckoning that many had anticipated and desired, in part because of his halting manner and in part because he seemed determined not to provide enlightenment beyond his written report on what happened when Russians tried to interfere with a U.S. election. A directive from the Justice Department instructed Mueller on the eve of his appearance that "any testimony must remain within the boundaries of your public report."

Brow furrowed, eyes searching, Mueller sometimes reached over to one of his attorneys for help identifying a passage he'd been asked about, or for direction about which House member had just spoken, or for a word or two about how to answer a question.

Hour after hour, partisan congressmembers stuck to their scripts, peppering Mueller with questions designed to bolster their version of reality: Was Trump a rogue president who would now be under indictment but for a legal opinion saying that he cannot be charged while still serving? Or is Trump instead a president struggling to do his job while a politically motivated investigation unfairly dominated his first two years in the Oval Office?

Democrats, frustrated in their push for Mueller to serve up a concise, penetrating synopsis of the case for indicting Trump, resorted to reading particularly damning lines from the report and turning to Mueller for a ritual "Correct" or "True."

In clipped answers, Mueller said he did not exonerate the president ("No"), that Trump directed his White House counsel to fire Mueller ("True") and that Trump could be prosecuted for obstruction of justice after he leaves office ("True.")

Republicans tried to get Mueller to clear the president in a dozen different ways. "Your report does not recommend impeachment?" asked Rep. Mike Johnson, R-La.

"I'm not going to talk about recommendations," Mueller replied.

Mueller studiously avoided uttering the word "impeachment," several times asking House members themselves to read aloud passages from the report that might have produced a sound bite of the special counsel saying the I-word.

But for all the verbal theatrics and gymnastics, CNN legal analyst Jeffrey Toobin concluded that "for the casual viewer trying to understand 'what did the president do wrong here?' it wouldn't be easy to answer that question."

Whatever the reasons for Mueller's halting performance, whether his apparent befuddlement was artful dodge or evidence of the creeping effects of age and strain, this was always going to be a reluctant, cautious witness. Throughout his career, Mueller has sought to publicly minimize his own role, leaving his work to speak for itself. For many years, he frustrated his speechwriters by crossing out every "I" in the talks they penned for him. It's not about me, he would say. "It's about the organization."

Like many of his colleagues, Sen. Lindsey Graham, R-S.C., struggled to describe Mueller's performance. "Bob Mueller has served our nation well for a very long time," he said. "And this hearing should not be the judge of his service to our country."