Omicron Wave Is Turning This City Into A Ghost Town

Britain's hospitality industry, already trying to recover from months of lockdown earlier in the year, is once again taking an economic hit as the pandemic once again steps up a gear. 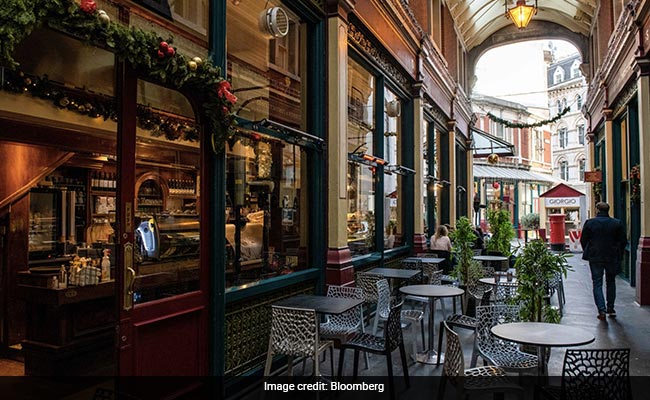 The UK is facing a record-breaking wave of infections.

The owner of Parlez, a pub and restaurant in south London, hoped that sales this Christmas would have bounced back fully from last winter's Covid-19 lockdown. Instead, every one of this week's group reservations canceled their bookings.

The U.K. is facing a record-breaking wave of infections, with Chris Whitty, the chief medical officer for England, warning on Wednesday that "phenomenal" case numbers mean doctors and nurses will inevitably get sick. That leaves businesses like Parlez pessimistic about what comes next.

Restrictions already in place, including advice to work from home, mean those who might have been comfortable meeting up for a drink are now thinking twice, owner Matt Ward said. Business at another of Ward's pubs, the White Horse in south London's Brixton neighborhood, has taken a hit too.

"The pub hasn't gotten back to its pre-Covid turnover anyway but now the instability has come back again," Ward said. "We had a good Saturday but a bad Sunday, then a good Monday with the quiz but a very quiet Tuesday."

Britain's hospitality industry, already trying to recover from months of lockdown earlier in the year, is once again taking an economic hit as the pandemic once again steps up a gear. This time there is -- as yet -- no government safety net even as almost 79,000 cases were reported on Wednesday.

Although venues are still open, trade is slowing ahead of the key peak festive period as people stay home and avoid socializing in pubs, clubs and restaurants.

In the City of London financial district, fewer than 30 people could be seen drinking outside pubs on Watling Street on Wednesday. Business was also slow at Leadenhall Market, where pubs are usually packed in December with hundreds of insurance brokers.

"The drop in revenues is terrible for restaurants particularly in the center of major cities like London," said Des Gunewardena, chief executive officer and chairman of D&D London, which is behind 43 restaurants, bars and hotels mostly located in the U.K capital.

Last week D&D lost 15% of its bookings, with this week shaping up to be much worse, Gunewardena told Bloomberg. "The government needs to step up and fully compensate us for the massive hit to profits caused by its announcements and Covid guidance."

Restaurateur Tom Kerridge took to social media on Tuesday to reveal that 654 guests had canceled reservations over the past six days and warn that many venues would "crumble" without help.

Here we are… This is the list of cancellations taken in one of our restaurants in the past six days… 654 guests
I understand why. Public health is THE most important thing.
But what will the government do to support the industry? Many places will crumble without help… pic.twitter.com/OyA2xTustJ

Transport is emptying out, too. The number of people using London's subway fell by almost a fifth in this week's Monday-morning rush hour, official figures showed.

Transactions at Pret A Manger Ltd.'s cafes in London's financial districts are now at their lowest level since October, according to Bloomberg's Pret Index.

In Downing Street, Prime Minister Boris Johnson is attempting to walk a tightrope between scientists who already believe tougher Covid measures are needed to counter omicron, and many of his Conservative Party colleagues, who have raised concerns about an erosion of civil liberties.

Johnson suffered the biggest rebellion of his tenure late Tuesday, as 100 Conservative lawmakers opposed parts of his "Plan B" strategy. Already under pressure over a series of missteps, and with his poll rating falling, the premier used a press conference on Wednesday to urge people to be "cautious" ahead of Christmas.

Leading lobby groups called on Johnson not to leave business without protection while seeking to safeguard public health. Ruby McGregor-Smith, president of the British Chambers of Commerce, said Whitty's call for Britons to reduce social contacts before Christmas would have "an enormous impact" on businesses and lamented the "baffling" lack of government assistance.

The Confederation of British Industry called Plan B "pragmatic and sensible" but warned about future "unintended consequences" for the economy.

Britain's hospitality industry is already having to grapple with labor and supply chain disruption and the impact of Brexit. With the virus resurgent, trade body UKHospitality forecast that pub and restaurant earnings will be down by as much as 40% for December due to cancellations.

The fear of some prominent hospitality figures is that if new restrictions are put in place, pubs and restaurants that struggle through December may find January -- traditionally a hard month for hospitality -- even tougher.

Tim Martin, chairman of JD Wetherspoon Plc, said earlier this week that the government's "radical" approach amounted to a "lockdown by stealth." Luke Johnson, the chairman of investment firm Risk Capital Partners and former chairman of the Pizza Express chain, said on Twitter that even the current curbs "are incoherent, arbitrary and likely to be wholly ineffective" against Covid.

It's not just hospitality facing hard times. Britain's retail sector - the biggest private employer in the country - is heavily reliant on footfall to shopping centers and malls in the final run-up to Christmas, which is when businesses make most of their profit.

Alex Baldock, chief executive officer of Currys Plc, the electronics retailer, said that the market was softening in the run-up to Christmas, and warned that further curbs would be highly damaging.

"There would have to be a very clear case on public health to close retail again," he said on a call with journalists. "There are 3 million jobs and 17 billion pounds ($22.5 billion) of tax at stake here. We are in a good position to power the recovery -- we are not asking for handouts, we just want to trade."

Even Premier League soccer is under threat. Skyrocketing infections have forced several postponements, with Burnley's Premier League match against Watford on Wednesday the latest to be called off.

Standing alongside Johnson at Downing Street, Nikki Kanani, medical director of primary care for the National Health Service in England, said sports fans should do their bit.

"If you're going to go to a stadium at the weekend, make it one where you can get a vaccine or help out to give a vaccine, rather than going to watch a match," Kanani said.