The virus first emerged in central China in late 2019, but since then authorities have largely brought the situation under control through travel restrictions, strict lockdowns and mass testing. 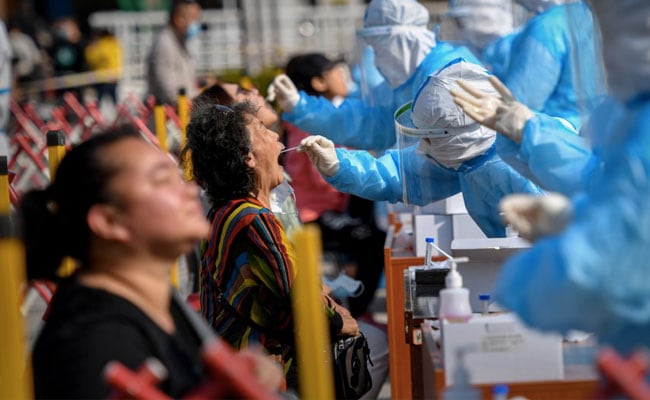 There were 63 new Covid-19 infections in mainland China on Thursday, including 11 imported cases.

Transport services were cut off to a city of 11 million people near Beijing on Thursday as local officials were reprimanded for a Covid-19 outbreak that pushed China's new infections to the highest single-day tally since July.

The virus first emerged in central China in late 2019, but since then authorities have largely brought the situation under control through travel restrictions, strict lockdowns and mass testing.

But a recent outbreak in northern Hebei province, which surrounds Beijing, has seen cases spike and prompted mass testing, school closures and suspension of travel links to the province.

On Thursday, there were 51 more cases reported in Hebei, the National Health Commission reported -- plus another 69 asymptomatic cases.

The vast majority of inbound and outbound flights to the city of Shijiazhuang were cancelled by Thursday afternoon, according to real-time flight tracker VariFlight, and trains suspended from leaving Shijiazhuang station.

Major highways leading into Shijiazhuang, around 300 kilometres (200 miles) south of Beijing, have been closed and inter-city bus travel halted.

The state media tabloid Global Times reported that the city was in "de facto lockdown" due to the large-scale suspension of transport services.

"I did the nucleic acid test last night, but don't have the results yet. Without it I can't leave the city," one young woman at Shijiazhuang train station told state broadcaster CCTV.

Three officials from Shijiazhuang's Gaocheng district -- the epicentre of the latest outbreak -- were reprimanded for their handling of the outbreak, the local disciplinary commission said Thursday.

The officials had allowed a woman who had tested positive to leave the area, the commission claimed.

Gaocheng district has been declared high risk and sealed off, and authorities said tens of thousands have already been tested for the virus.

There were 63 new Covid-19 infections in mainland China on Thursday, including 11 imported cases and one other domestic case in the northeast.