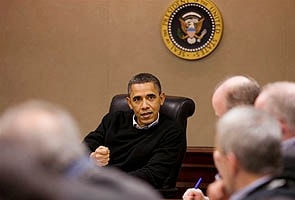 Washington: US President Barack Obama issued a plea for restraint in Egypt after meeting with national security aides on Saturday to assess the Cairo government's response to widespread protests threatening the stability of the country.

But Obama offered no reaction to President Hosni Mubarak's decision earlier Saturday to name a vice president for the first time since coming to power nearly 30 years ago. Mubarak appointed his intelligence chief, Omar Suleiman, who's well respected by American officials. The president also fired his Cabinet.

And it's not just the US, several world leaders have expressed concern over the rapidly deteriorating situation in Egypt and called for peace.

French President Nicolas Sarkozy, German Chancellor Angela Merkel and British Prime Minister David Cameron have issued a joint statement saying, "It is essential that the political, economic and social future that President Mubarak has promised is implemented fully and promptly and it responds to the aspirations of the Egyptian people."

"We call on President Mubarak to initiate a process of change that is translated through a broader representation in government and free and fair elections," the statement added.

Five days of protests in Egypt have left at more than 70 dead.

Before Suleiman's appointment, State Department spokesman PJ Crowley said the US wanted to see Mubarak fulfill his pledges of reform as protests swept the country.

"The Egyptian government can't reshuffle the deck and then stand pat," Crowley said on his Twitter account. "President Mubarak's words pledging reform must be followed by action."

Crowley said Egyptians "no longer accept the status quo. They are looking to their government for a meaningful process to foster real reform."

After speaking to Mubarak by telephone late Friday, Obama delivered a four minute statement calling on the Egyptian leader to take steps to democratize his government and refrain from using violence against his people.

As events unfolded on Saturday, Obama and his advisers kept a low profile.

The US President spent part of the morning watching one of his daughter's basketball games at a community centre in the Maryland suburbs.

Obama did not attend that session.

His afternoon meeting with many of the same officials also included press secretary Robert Gibbs and adviser David Plouffe.

Suleiman has played an active role in the peace process, particularly in trying to arrange compromise between rival Palestinian factions, Fatah and Hamas. He has been at the forefront of the Egyptian effort to crackdown on arms smuggling from Egypt into Gaza.

Suleiman has been "the point person on both the US relationship and the Israel Egyptian relationship," said Jon Alterman, Mideast director at the Center for Strategic and International Studies. "He's very reassuring both ways."

Diplomatic cables released by Wikileaks help illustrate that point. One reports on an April 2009 meeting between Suleiman and Admiral Mike Mullen, chairman of the Joint Chiefs of Staff. Suleiman, the cable says, "explained that his overarching regional goal was combating radicalism, especially in Gaza, Iran, and Sudan."

The cable reports that Suleiman said Egypt must "confront" Iranian attempts to smuggle arms to Gaza and quotes him saying "a Gaza in the hands of radicals will never be calm."

A 2007 cable discusses scenarios for presidential succession and reports the view of an Egyptian official that Mubarak's son Gamal viewed Suleiman as a potential threat.

A second cable from 2007 describes Suleiman as Mubarak's "consigliore," a term more typically associates with mobsters. Even then, Suleiman was mentioned as likely to assume the role of vice president. It says Suleiman himself "adamantly denies any personal ambitions, but his interest and dedication to national service is obvious."

"He could be attractive to the ruling apparatus and the public at large as a reliable figure unlikely to harbor ambitions for another multi-decade presidency," the cable states. It also says Mubarak had promised to name Suleiman vice president "several years ago" but then reneged.

The cables were sent by the US Embassy in Cairo.

"It is intended to send a message that if Hosni Mubarak leaves, the system remains," he said. "It is not reassuring to the protestors, but it is reassuring to people who fear that Egypt might be slipping into chaos."

Rep. Ileana Ros-Lehtinen, R-Fla, chair of the House Foreign Affairs Committee, said Saturday that Mubarak should schedule elections in order to allow the Egyptian people to express their right to choose their leaders.

Ros-Lehtinen also cautioned against the involvement of extremist elements which could seek to use the current turmoil as an opportunity to advance their agendas.

"The Egyptian people need to be afforded a peaceful venue to express their will," she said.

In New York, Cambridge, Mass., and Washington, protesters took to the streets demanding that Mubarak step down.

Outside the Egyptian Embassy a few miles from the White House, demonstrators also criticized the Obama administration's response to the tumult in Egypt. They waved Egyptian flags and held signs that read "Obama: Democracy or Hypocrisy?" and "Victory to the Egyptian People!"