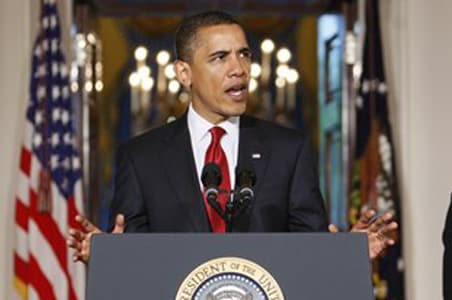 US President Barack Obama's Middle East tour aimed at reaching out to the Muslim world is attracting the ire of right-wing Israeli groups, who have demonstrated against him near the American consulate in Jerusalem.

Such groups are also set to put up doctored posters of Obama across Israel which shows him wearing a 'kaffiyeh', a traditional Arab head wear and described as a "Jew hater" and an "anti-semite".

Some 130 protesters gathered in front of the American Consulate yesterday evening at the start of Obama's Middle East trip, during which he is expected to make overtures to the Arab world, chanting "No, You Can't" and waved posters saying "20 new 'settlements' by 2010 - Yes We Can!"

Far right activist, Itamar Ben-Gvir, who attended the protest, told Channel 10 that "it appears that we've arrived at a red line, which has already been crossed by the most anti-Semitic American President".

"We are launching a campaign against Barack Hussein Obama. He is bad for the people of Israel and for the state of Israel and his policies could bring about disaster," Ben-Gvir added.

Obama has insisted that the new Israeli government accept the two-state solution for Israel-Palestinian conflict and put a complete halt to settlement activities in the West Bank, something that has put him at odds with hardliner Prime Minister Benjamin Netanyahu who rejects both.

Ha'aretz online put up a photo on its web site from a poster of Obama wearing a kaffiyeh and his name "Barrack Hussein Obama", a "Jewish hater" and an "anti-semite" inscribed on it to be reportedly put up across Israel by the right wing group, Hazit.

"We expect our Prime Minister to say 'no' to anyone who tries to harm us," Ben-Gvir added.

Nadia Matar, the Belgian-born co-chair of Women in Green, which organised the event, made a point of repeatedly mentioning Obama's middle name, 'Hussein', because "we have to remind ourselves that he received an Islamic education in Indonesia."

"We are connected to our land like a mother is connected to her children," Matar told reporters adding, "And I want to warn you -- don't mess with a Jewish mother who feels her children or her homeland are in danger. Every part and parcel and hilltop and stone in the Land of Israel is like one of our children. And we'e going to protect it like lionesses."