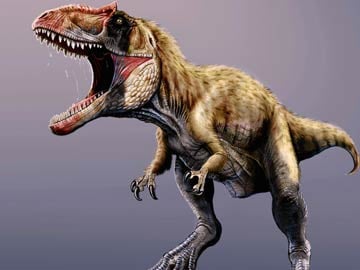 London: In a first physical evidence that a sudden dip in temperatures wiped out dinosaurs, a team of scientists has revealed that a massive asteroid hit the earth 66 million years ago, causing "nuclear winter" and the ultimate demise of giant animals.

The "Chicxulub" impact is likely to have lowered global sea surface temperatures by as much as seven degrees Celsius.

The evidence was hidden in Brazos River region of Texas. Sedimentary rocks were analysed from the same age as the asteroid impact, containing layers of broken shells.

"The global 'impact winter' perturbed a relatively stable, warm climate and likely represented a major stress factor for life on earth," said Johan Vellekoop from Utrecht University in the Netherlands.

The "winter" is thought to have lasted no more than two to three decades but that was long enough to wipe out the dinosaurs, flying and swimming reptiles, and many other forms of life, researchers noted.

As seen in computer simulations, sunlight reaching the earth's surface might have been reduced to around 20 percent of its normal level after the impact.

Promoted
Listen to the latest songs, only on JioSaavn.com
The first hours of the impact were marked by earthquakes, tsunamis and global wildfires.
Next, dust and sulphur droplets would have collected in the atmosphere and blocked out the sun's rays.

The 'dark phase' would have caused a global collapse of terrestrial and marine food webs, said the study that appeared in the journal Proceedings Of The National Academy Of Sciences.