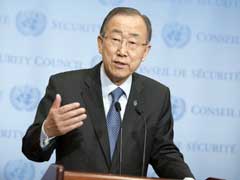 "Nuclear weapons are an existential threat to humanity," Ban said in an informal briefing to the UN General Assembly.

United Nations: Nuclear weapons pose an existential threat to humanity, UN chief Ban Ki-moon on Thursday said, days after North Korea claimed to have successfully tested a nuclear device and terrorist outfits like the ISIS and al-Qaeda have openly expressed their desire for the weapon.

"Nuclear weapons are an existential threat to humanity," Ban said in an informal briefing to the UN General Assembly.

"Countries that regard their security as a matter of retaining or attaining nuclear weapons are only increasing risk -- their own and the world," he said.

The Secretary General said that the risks multiply with the emergence of violent and unaccountable non-state actors.

"Let us stop this dangerous spiral, and instead put disarmament and non-proliferation back at the forefront of the international agenda," Ban urged.

According to him, the threat posed by nuclear weapons is omnipresent yet attracts global attention only intermittently.

"Eight days ago, the test of a nuclear weapon by the Democratic People's Republic of Korea provided the latest such jolt. This was a destabilising act that violates Security Council resolutions and imperils collective security."

"It underscores yet again the general risk of nuclear weapons - and the specific dangers of the DPRK, which faces severe developmental and human rights challenges," he said.

The nuclear-weapon states have made some progress in reducing the dangers, including through reductions in deployed arsenals and improved transparency, he noted.

But the Comprehensive Nuclear-Test-Ban Treaty (CTBT) has still not entered into force, he said. Negotiations on a ban on the production of fissile material have not begun. And some nuclear-armed states are spending massively to modernise their arsenals, Ban said.

Ban said he would present a Plan of Action to Prevent Violent Extremism.

"Our challenge is to defeat Daesh (ISIS), Boko Haram, al-Shabaab, al Qaeda and other such groups - without defeating ourselves through counter-productive approaches that fuel the extremism we are trying to extinguish. Well-calibrated, security-based counter-terrorism measures remain essential. But human rights must be at the forefront of our response," he said.

In 2016, he urged the UNGA members to work towards ending the conflicts that global divisions have helped prolong, do far more to protect vulnerable populations, and show that they are "serious about preventing the upheavals of tomorrow."

"My peace operations initiative sets out a comprehensive action agenda to strengthen United Nations peace and security tools, including through closer peacekeeping partnerships with regional organisations and local communities," he said.

Ban said if 2015 was a year of global sustainable development action, 2016 must be a year of national SDG traction.

"These towering achievements point the world in promising new directions. At a time of massive humanitarian need, they give hope that we can overcome global divisions in the name of the common good," he said.
Comments
North Korea Nuclear TestNuclear weaponsBan Ki-moon