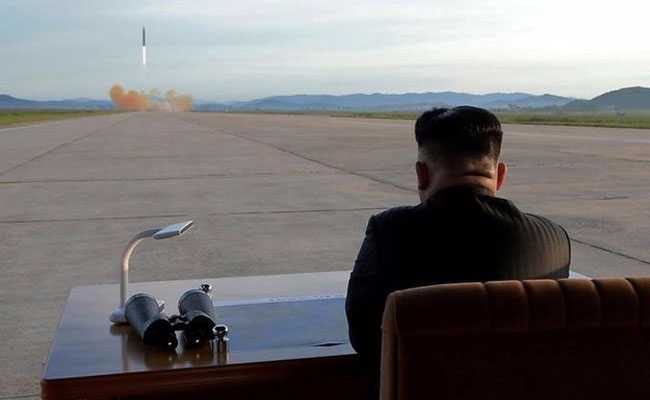 Kim Jong Un said that the United States could now "never start a war against me or our country."

Beijing: North Korean leader Kim Jong Un boasted in an annual New Year's Day speech Monday that he had a nuclear button on his desk and that the entire United States was within range of his weapons - but he also vowed not to attack unless threatened.

Kim promised to focus this year on producing nuclear warheads and missiles for operational deployment, adding that the United States could now "never start a war against me or our country."

But he also struck a conciliatory note, opening the door to dialogue with South Korea and saying he would consider sending a delegation to the Winter Olympics to be held in his southern neighbor in February.

"The United States should know that the button for nuclear weapons is on my table," he said during the nationally televised speech, according to a provisional translation by The Associated Press. "The entire area of the U.S. mainland is within our nuclear strike range."

But Kim also said those weapons would not be used unless his country faced aggression.

"This year, we should focus on mass-producing nuclear warheads and ballistic missiles for operational deployment," Kim said. "These weapons will be used only if our security is threatened."

North Korea conducted its sixth and most powerful nuclear test in September and launched its most high-tech intercontinental ballistic missile in November, ignoring international condemnation and steadily tightening sanctions.

In typically bellicose language, it declared the latest round of United Nations sanctions imposed last month an "act of war," and Kim said his country had achieved the historic feat of "completing" its nuclear forces.

North Korea's nuclear capabilities do not yet match Kim's boasts, experts say, since it is far from clear it could successfully deliver a nuclear weapon on one of its missiles. Yet there is little doubt its capabilities have advanced significantly in the past year.

But Kim, dressed in a Western-style gray suit and a tie, also offered a potential olive branch to Seoul saying it is imperative to lower military tensions on the Korean Peninsula and improve ties with the South.

He said that the path to dialogue was open and that he would consider sending a delegation to the Winter Olympics in PyeongChang, South Korea.

"North Korea's participation in the Winter Games will be a good opportunity to show unity of the people, and we wish the Games will be a success," he said, according to a Reuters translation of the speech. "Officials from the two Koreas may urgently meet to discuss the possibility."

South Korea has been trying to reassure the rest of the world that the Olympics will be safe despite the nuclear tensions, and President Moon Jae-in has said North Korea's participation would ensure their safety. He also proposed last month that Seoul and Washington postpone annual joint military drills until after the Olympics, and he generally takes a less confrontational approach to relations with the North than his predecessor, Park Geun-hye.

John Delury, a professor of international relations at Yonsei University in Seoul, said Kim's message to Seoul was "more promising" than he had anticipated, addressing in a specific and actionable way South Korea's desire to make the Games a success.

"That should give hope to those in the South who are trying to get something going and open a channel at least," he said.

The idea of improving relations between the two Koreas is one that is frequently spoken about but seldom achieved, and Kim's warmer words could also be seen as an attempt to drive a wedge between Seoul and Washington.

While Kim's words were more combative towards the United States, he also refrained from a personal attack on President Donald Trump, after the two men engaged in several rounds of mutual name-calling in 2017, Delury noted.

Daryl Kimball, executive director of the Arms Control Association, said Kim's claims about his country's nuclear capability underscored that there was no viable "military solution" to denuclearizing North Korea and that sanctions alone would not persuade Pyongyang to halt or reverse its nuclear buildup.

"To avoid a nuclear conflict and the full-scale deployment of an operational North Korean strategic deterrent force, U.S. leaders, in concert with South Korea, should redouble efforts to engage North Korea in direct talks and cease any further explicit or implicit threats of military action against the North," he said in an email.

"The upcoming Olympics provide an important opportunity to break the ice and to begin discussions with the North Koreans on mutual steps that reduce the chances of miscalculation and war," he added.

Promoted
Listen to the latest songs, only on JioSaavn.com
In the speech, Kim also stressed North Korea's economic achievements and noted the importance of improving the nation's standard of living, the AP reported.