Now, a royal wedding set to take place in Bhutan 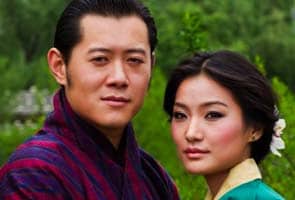 New Delhi: The 31-year-old king of Bhutan, an Oxford-educated bachelor crowned in the remote Himalayan country in 2008, set up another royal wedding on Friday by announcing his engagement.

Jigme Khesar Namgyel Wangchuck, who helped usher in democracy in the Buddhist nation, revealed his intention to marry 20-year-old student Jetsun Pema during an address to parliament.

"As king, it is now time for me to marry. After much thought I have decided that the wedding shall be later this year," he announced, according to a copy of the speech sent to AFP.

"While she is young, she is warm and kind in heart and character," he said of the future queen, who appeared in traditional Bhutanese dress in a joint picture released of the couple.

The announcement clears the way for another wedding in a year of royal nuptials that has already seen Britain's Prince William marry Kate Middleton in London in an event that captured the world's attention.

In July, Prince Albert II of Monaco is to wed his swimming champion fiancee Charlene Wittstock.

"There will be a celebration, but His Majesty has requested that the government not make big plans and big celebrations," Dorji Wangchuck, from the royal press office, told AFP by telephone from the capital Thimphu.

"It is because of the lack of resources (in Bhutan) and secondly to make the celebrations more intimate and personal," he said, adding that the wedding was scheduled for October.

The king has known Pema, a student from Thimphu, "for quite some time", he said, adding that she had already begun to accompany the monarch on trips around the country.

Educated in India and Britain, where she attended Regents College in central London, Pema likes fine arts, painting and basketball, according to the official biography released by the king's office.

Bhutan is one of the most remote and reclusive places on Earth, sandwiched between India and China.

It had no roads or currency until the 1960s, allowed television only in 1999 and continues to resist the temptation of allowing mass tourism -- preferring instead to allow access to only small organised groups of well-heeled visitors.

It is also famed for the invention of Gross National Happiness, which is used to measure the progress and well-being of its citizens instead of Gross Domestic Product (GDP) other countries use to measure wealth.

Wangchuck, who can take multiple wives under the Bhutanese legal system, is widely revered by his subjects.

"It required an awful amount of restraint in parliament not to explode into spontaneous joy," the leader of the opposition in parliament, Tshering Tobgay, told AFP after hearing the news.

"Everybody will be overjoyed and will feel like celebrating, but it's not our custom to go into the streets and make public our emotions. This is not Bhutanese."
Tobgay described the king's fiancee as "very approachable", "very friendly" and "beautiful".

The relationship "wasn't completely public, but it wasn't obviously hidden either", he said.

The king was crowned in 2008 following the abdication of his father, who began the process of introducing democracy to the staunchly traditional and insular nation in 2001.

Former king Jigme Singye Wangchuck stepped down saying he wanted the shift to democracy to be matched with a change of face in the white-walled royal palace that overlooks Thimphu.

Promoted
Listen to the latest songs, only on JioSaavn.com
In his first speech after his coronation, the current king pledged to shield Bhutan from the negative forces of globalisation.

"My deepest concern is that as the world changes we may lose these fundamental values on which we rest our character as a nation and people," he said at the time.