Notre Dame Fire: Rising above the flames, came a chorus of voices - uniting in song as they mourned their beloved cathedral. 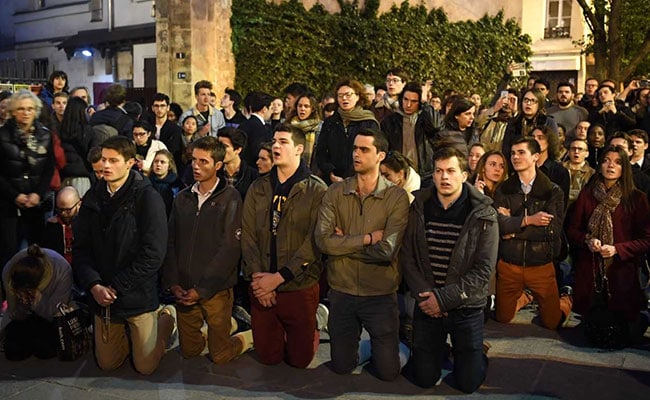 For those watching helplessly as flames engulfed one of France's most iconic monuments Monday, some wept and held hands, while others prayed. When Notre Dame's spire fell, taking centuries of history down with it, witnesses gasped in horror as a monument that meant so much began to crumble in front of their eyes.

"Notre-Dame is aflame," read a tweet from French President Emmanuel Macron. "Great emotion for the whole nation. Our thoughts go out to all Catholics and to the French people. Like all of my fellow citizens, I am sad to see this part of us burn tonight."

But as night fell in Paris and the fire continued to roar, the surrounding crowds came together in heartbreak, in disbelief and in song. Rising above the flames came a chorus of voices - uniting through hymns as they mourned their beloved cathedral.

As of Monday evening, a video of bystanders singing "Ave Maria" had been viewed more than 3.5 million times on Twitter. The video was widely shared, with many users referring to the scene in Paris as "powerful" and "moving."

"All of us who've reported in Paris recently have known many tragic nights in this most beautiful of cities," tweeted The Washington Post's Paris correspondent, James McAuley. "But tonight is different. Impossible to describe the bewilderment, the eerie quiet, the tears at the sight of 800 years of history vanishing in less than hour."

France's Notre Dame, steeped in history, survived the French Revolution and two world wars. Around the world, many reacted to news of the blaze by recalling trips to the cathedral and sharing photos of the landmark in brighter days. Others took to social media to express hope that France would eventually be able to rebuild all that was lost.

The cause of the fire is yet to be determined, although officials have suggested it is connected to the recent restoration.

(This story has not been edited by NDTV staff and is auto-generated from a syndicated feed.)
Comments
Notre DameNotre Dame Cathedral FireNotre Dame cathedral in Paris

"I Was In Hell": Infected Pregnant Liberian Nurse Recounts Ordeal