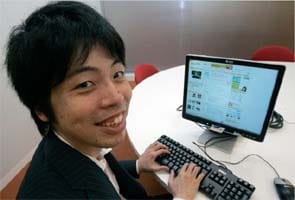 Mr. Zuckerberg, the 26-year-old Facebook chief executive and co-founder, may be the man of the moment in the United States and much of the rest of the online world. But here in Japan, one of the globe's most wired nations, few people have heard of him.

And relatively few Japanese use Facebook, the global social-networking phenomenon based in Palo Alto, Calif., that recently added its 583 millionth member worldwide.

Facebook users in Japan number fewer than two million, or less than 2 percent of the country's online population. That is in sharp contrast to the United States, where 60 percent of Internet users are on Facebook, according to the analytics site Socialbakers.
So even as Goldman Sachs pours $450 million into the company, Japan, with a large and growing online advertising market, is a big hole in Facebook's global fabric.

Japanese, until now, have flocked to various well-entrenched social networking sites and game portals -- like Mixi, Gree and Mobage-town. Each has more than 20 million users, and each offers its own approach to connecting people online.

One trait those sites have in common is crucial to Japan's fiercely private Internet users. The Japanese sites let members mask their identities, in distinct contrast to the real-name, oversharing hypothetical user on which Facebook's business model is based.

"Facebook does face a challenge in Japan," said Shigenori Suzuki, a Tokyo-based analyst at Nielsen/NetRatings. "There are powerful rivals, and then there's the question of Japanese Web culture."

Taro Kodama, Facebook's manager for Japan, referred questions to the United States, where a spokeswoman, Kumiko Hidaka, did not respond to requests for comment.

One key to the growth that might help justify the $50 billion valuation that Goldman's planned investment placed on Facebook would be to expand its presence in Japan. The overall online advertising market in the country had sales of 706.9 billion yen ($8.5 billion) in 2009. (Someday China could present another big growth opportunity. But, for now, government censors there block access to Facebook.)

Mr. Zuckerberg has promised to address the Japan gap. But it will not be easy.

To begin with, each of Japan's own social networking sites, though no longer growing at the breakneck pace of the past few years, has at least 10 times as many users as Facebook, which was introduced in Japanese in mid-2008.

Most similar to Facebook is Mixi, started in 2004. Users post photographs, share comments and links, and interact on community pages that have become huge forums based on themes as diverse as recipe-sharing and Michael Jackson. Mixi has more than 21.6 million members.

Fast-growing Gree, which overtook Mixi this year with nearly 22.5 million registered users, has expanded by buttressing a popular game platform for mobile phones that offers free games, which users play with manga-style avatars; fancy outfits or tools for games are available for a fee.

Now, all three sites are starting to incorporate elements of Facebook -- like allowing third-party developers to make apps for the sites -- giving Japanese users little reason to switch.

Mixi, meanwhile, has been adapting some techniques of other popular Silicon Valley start-ups. Since late 2009, for example, Mixi users have been able to send short, real-time messages with a maximum of 150 characters, akin to Twitter, the popular microblogging service.

Such flourishes have not kept many Japanese consumers from taking to Twitter, which is catching on here at a speed Facebook may envy. A partnership with Digital Garage, a local Internet and mobile services company, has touched off a surge in Twitter users, who numbered about 10 million in Japan in July, according to Nielsen Online NetView. But Twitter does not require users to reveal their identities.

Facebook and Mr. Zuckerberg are about to get a blast of publicity in Japan, although perhaps not of the most positive sort. "The Social Network," the movie that presents a less-than-flattering portrayal of Mr. Zuckerberg, opens in Japan this week.

Facebook has stepped up efforts to tailor its service to Japan. A Japanese version of the site, translated free by volunteers, was introduced a few years ago, but the company opened a Tokyo office in February to customize the site for Japan. (Facebook's Japanese site, for example, allows users to display their blood types, considered an important personality trait here.)

Some users complain that Facebook's Japanese-language site is awkward to use.

People like Maiko Ueda, 26, a Mixi devotee, see little reason to switch. Ms. Ueda, who works at a stationer based in Osaka, logs into Mixi at least once a day to read other users' "diaries," which resemble status updates on Facebook, albeit in longer form. She uploads pictures of her American shorthair cat, and sometimes writes about her day in her own posts.

But most people on Mixi do not know her real name, nor have they seen what she looks like. In her five years on Mixi, she has never uploaded a photo of herself.

She has heard of Facebook but says she is suspicious of "how open it seems."

"I don't want to give it my real name," Ms. Ueda said. "What if strangers find out who you are? Or someone from your company?" She spoke on the condition that her Mixi user name would not be revealed.

In a survey of 2,130 Japanese mobile Web users by the Tokyo-based MMD Laboratory, 89 percent of respondents said they were reluctant to disclose their real names on the Web. Specialists say that while Facebook users in the United States tend to recreate real-life social relationships online, many Japanese use Web anonymity to express themselves, free from the pressures to fit into a conformist workplace.

Mixi has grown by letting users sign up with pseudonyms, and gives its subscribers fine-tune controls over who sees posts and other uploads. Mixi also lets users closely monitor who has viewed their profiles with a function known as "footprints."

In contrast, Facebook has insisted that Japanese users adhere to its real-name policy. "Facebook values real-life connections," warns a message that pops up when a Japanese user withholds information, like the traditional characters used in names. "Please use your real name," it reads.

"I think there has to be an event, a celebrity signing up for Facebook, or something else that teaches Japanese users that identifying themselves online isn't scary and can be useful," said Toshihiko Michibata, an e-commerce and social media consultant in Japan.

"The dangers of too little privacy may be lost in the global Facebook fad, but it's likely to become a growing problem elsewhere," said a popular blogger known online as Akky Akimoto, who does not reveal his real name and refuses to be photographed in public. "I'd hate it if people on the street recognize me, without me knowing."

Still, Facebook may have a powerful force on its side: Japanese consumers' penchant for all things new.

With Mixi in its seventh year, it is starting "to feel old," said Mitsuyo Nakata, a Web designer. Its growth has slowed, as have advertising revenue and investor confidence. Profits have fallen at Mixi for three of the last four quarters, and its stock price has slumped 70 percent since its initial public offering in 2006.

In an interview with the Nippon Television Network in November, Mr. Kodama, the Facebook manager for Japan, said he was confident that users would start warming to Facebook's real-name policy once they discovered the usefulness of finding old classmates online.
"The Internet in Japan has not been so closely connected with real society," he said. "Those other community sites can keep offering the joys of staying remote from real life."