North Korea Warns Of A Nuclear Test 'At Any Time' 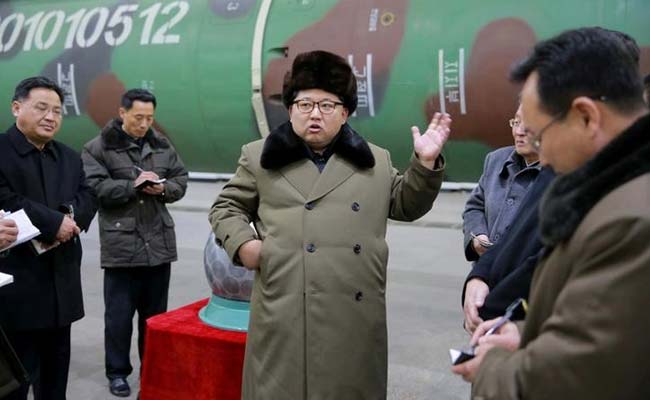 Seoul: North Korea warned Monday that it will carry out a nuclear test "at any time and at any location" set by its leadership, in the latest rhetoric to fuel jitters in the region.

Tensions on the Korean peninsula have been running high for weeks, with signs that the North might be preparing a long-range missile launch or a sixth nuclear test -- and with Washington refusing to rule out a military strike in response.

A spokesman for the North's foreign ministry said Pyongyang was "fully ready to respond to any option taken by the US".

The regime will continue bolstering its "preemptive nuclear attack" capabilities unless Washington scrapped its hostile policies, he said in a statement carried by the state-run KCNA news agency.

"The DPRK's measures for bolstering the nuclear force to the maximum will be taken in a consecutive and successive way at any moment and any place decided by its supreme leadership," the spokesman added, apparently referring to a sixth nuclear test and using the North's official name, the Democratic Republic of Korea.

The North has carried out five nuclear tests in the last 11 years and is widely believed to be making progress towards its dream of building a missile capable of delivering a warhead to the continental United States.

It raises the tone of its warnings every spring, when Washington and Seoul carry out joint exercises it condemns as rehearsals for invasion, but this time fears of conflict have been fuelled by a cycle of threats from both sides.

The joint drills have just ended, but naval exercises are continuing in the Sea of Japan (East Sea) with a US strike group led by the aircraft carrier US Carl Vinson.

The Pyongyang foreign ministry spokesman said if the North was not armed with "the powerful nuclear force", Washington would have "committed without hesitation the same brigandish aggression act in Korea as what it committed against other countries".

The statement reasserts the North's long-running rhetoric on its military capabilities.

Seoul also regularly warns that Pyongyang can carry out a test whenever it decides to do so.

Pyongyang's latest attempted show of force was a failed missile test on Saturday that came just hours after US Secretary of State Rex Tillerson pressed the UN Security Council to do more to push the North into abandoning its weapons programme.

Tillerson warned the UN Security Council last week of "catastrophic consequences" if the world does not act and said that military options for dealing with the North were still "on the table".

In an interview that aired Sunday on CBS television network's "Face the Nation" programme, Trump said that if North Korea carries out another nuclear test "I would not be happy".

(Except for the headline, this story has not been edited by NDTV staff and is published from a syndicated feed.)
Comments
North Korea nuclear testsNorth korea missile launchNorth Korea Nuclear ProgramUS North korea conflict