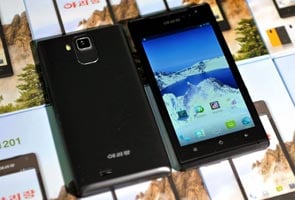 Seoul: North Korea, one of the most isolated and censored societies on the planet, has unveiled what it says is a domestically-produced smartphone.

The existence of the phone, named after a famous Korean folk song, came to light during a factory inspection by North Korean leader Kim Jong-Un at the weekend.

During the tour, Kim was given a detailed briefing on the "performance, quality and packing of the Arirang hand phone," Pyongyang's official Korean Central News Agency (KCNA) reported.

Some analysts suggest the "Arirang" is aimed at getting North Koreans to use an officially-approved phone that can be properly monitored.

While Internet access is virtually non-existent in North Korea, which comes bottom of any media freedom survey, the country is not a complete IT desert.

Cell phones were introduced in 2008 through a joint venture with the Egyptian telecom firm Orascom, which says there are now two million users in North Korea.

A domestic Intranet was launched in 2002 and some state bodies have their own websites.

It is a natural progression for an impoverished country desperate for investment, but in North Korea the economic imperative is always weighed against the potential for social disruption.

Subscribers to the sole cell phone system provider, Koryolink, can call each other, but not outside the country.

The Intranet is similarly cut off from the rest of the world, allowing its very limited number of users to exchange state-approved information and little more.

Access to the full-blown Internet is for the super-elite only, meaning a few hundred people or maybe 1,000 at most.

For all the regime's efforts, the information barrier erected around North Korea has, in recent years, begun to lose some of its prophylactic power.

Smuggled Chinese mobile phones allow people near the border to connect with Chinese servers and make international calls, while re-wired TVs allow access to outside broadcasting.

The KCNA report on Kim's factory visit noted that the young leader praised the "Arirang's" developers for coming up with a product that "provides the best convenience to the users while strictly guaranteeing security".

KCNA photos of the factory visit show workers with the finished phones, inspecting, testing and packing them. There are no pictures of an actual assembly line.

"Despite KCNA's reporting that the handsets are made at the factory, they are probably made to order by a Chinese manufacturer and shipped to the factory where they are inspected before going on sale," said Martyn Williams, who runs the North Korea Tech website.

Steven Millward on the Tech In Asia website reached the same conclusion.

"Possibly, the whole smartphone is made in China, and only the final boxing is done in the rather sparse plant that Kim Jong-Un toured," Millward said.

Promoted
Listen to the latest songs, only on JioSaavn.com
In February, a picture of Kim Jong-Un with a smartphone triggered fevered speculation about which brand was favoured by the leader of one of the world's most repressive nations.

After ruling out an Apple iPhone or a Galaxy from South Korea's Samsung, the consensus was an HTC phone made in Taiwan.