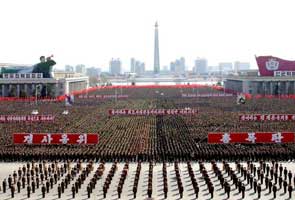 London: Aid agencies helping millions of people in North Korea could be forced to pull out after a Chinese bank cut ties with main foreign exchange bank, a humanitarian group said on Wednesday.

The freeze - imposed amid growing concern over North Korea's nuclear ambitions - has made it impossible for aid agencies to transfer money to fund projects, many of them aimed at helping chronically malnourished children.

Some aid workers are now resorting to bringing in cash in person, putting them at personal risk. It is thought some agencies have only enough reserves to last a couple of months.

"All agencies with offices in Pyongyang are affected and everyone is extremely concerned," Mathias Mogge, director of programmes for German aid group Welthungerhilfe, told the Thomson Reuters Foundation.

"This could eventually reduce our ability to carry out projects or even force a complete close down. If all the agencies had to pull out, it would affect millions of people," said Mogge, who has just returned from the secretive country.

Bank of China Ltd this month shut the account of North Korea's state-run Foreign Trade Bank, which was hit with US sanctions in March after Washington accused it of helping finance Pyongyang's nuclear weapons programme.

It gave no reason for the closure and the bank declined to comment further.

Mogge said aid agencies had relied on Chinese banks to make transfers to the Foreign Trade Bank as they cannot make direct transfers to North Korea.

Sporadic famines are commonplace in North Korea, which is prone to floods, droughts and harsh winters. A famine in the 1990s killed at least a million people, rights groups say.

More than a quarter of children are chronically malnourished, to a U.N.-backed nutrition survey published in March said.

Mogge said there was no looming crisis, but food security was precarious and poor nutrition would permanently affect children's physical and mental development.

Welthungerhilfe, which is running programmes in North Korea worth about 5 million euros, said routine transfers amounting to 300,000 euros had been blocked in recent weeks and attempts to use other international banks had also failed, as they too were subject to the sanctions.

The U.N. children's agency, UNICEF, and the World Food Programme also have offices there.

Promoted
Listen to the latest songs, only on JioSaavn.com
The six agencies have written to the European Union to highlight their predicament.

"We want the EU to talk to North Korea and China. We hope that if the EU talks to the Chinese authorities they will maybe find a way for us to get our money in through the banking system," Mogge said.
© Thomson Reuters 2013