Last week, North Korea called Donald Trump a "lunatic" as tensions rose following the death of US student Otto Warmbier, who was detained for 18 months in North Korea. 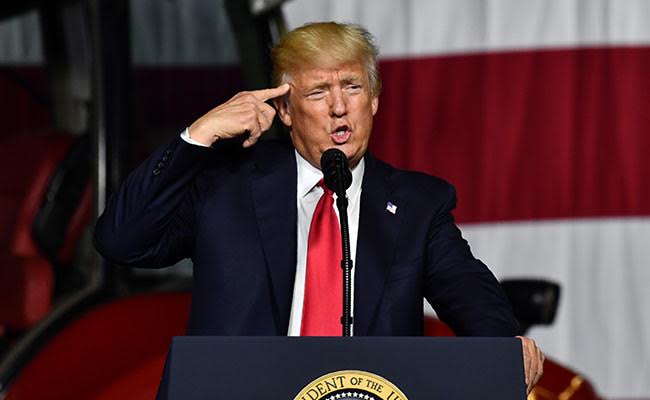 Seoul, South Korea: North Korea likened US President Donald Trump to Adolf Hitler on Tuesday in its latest diatribe amid high tensions over Pyongyang's military ambitions and ahead of a visit to Washington by the South's new leader.

The latest attack came a week after nuclear-armed Pyongyang called Trump a "lunatic" as tensions rose following the death of US student Otto Warmbier, who was detained for 18 months in the North and then evacuated in a coma.

An editorial on the North's official Korean Central News Agency (KCNA) dialled the hostile rhetoric up higher, slamming Trump's key policies as being akin to "Nazism in the 21st century."

Trump declared at his inauguration in January that "From this moment on, it's going to be America first."

KCNA said: "The 'American-first principle'... advocates the world domination by recourse to military means just as was the case with Hitler's concept of world occupation."

Trump was "following Hitler's dictatorial politics" to divide others into two categories, "friends and foes" to justify "suppression", it added.

The North habitually denounces its enemies in colourful terms in its propaganda, but comparisons to the instigator of World War II and architect of the Holocaust are unusual even by its own standards.

The Trump administration is pushing for stronger sanctions against the North over its nuclear and missile programmes and KCNA accused it of blocking medical supplies in what it said was "an unethical and inhumane act, far exceeding the degree of Hitler's blockade of Leningrad".

Tackling threats from the isolated North is expected to be at the top of the agenda during this week's Washington summit between Trump and newly elected South Korean President Moon Jae-In.

A string of atomic and missile tests by Pyongyang  -- and threats of military action by Washington -- have ratcheted up tensions on the peninsula.

Warmbier's death added to the strains, with Trump slamming the "brutal regime" of the North's young leader Kim Jong-Un.

"The Trump way of thinking that the whole world may be sacrificed just for the better living of the US, has put even its allies and stooges in a pretty fix," KCNA added.

The North has often used bombastic and sometimes racist and sexist rhetoric to slam other world leaders for actions that displeased the regime.

Promoted
Listen to the latest songs, only on JioSaavn.com
Pyongyang compared former US president Barack Obama to a monkey after he supported the 2014 cinematic release of "The Interview", a Hollywood comedy mocking the North Korean leadership.